9 reviews
Save to Dropbox
Phillip and the Leg Horse set off on a strange and deadly mission to find the legendary City Of Forms from which all things in the world are derived. On their travels they must overcome ghosts, criminals, hyponosis, lions, Draculas, cryptic letters, muscle hedonists, swamp knights, mysterious caves, blood ghouls, grotesque monsters, purple drank and more in order to discover the secret of Space Funeral.

A shortish RPG Maker 2003 game with original graphics, a soundtrack of creaky vintage electronica and obscure Japanese noiserock, and lots of blood. in other news the gamejolt page for space funeral has 10000+ downloads! i dont even know

so this blog isnt a complete waste i'm gonna talk a lil here about probably the biggest influence on this game, which was Gary Panter's "Jimbo In Purgatory" comic book. it's basically this berserk mashup of the entire western literary canon into an apparantly crude comicbook filled with robots and cartoon dogs. alice cooper and the evil robot from westworld both show up to declaim lines pulled from boccaccio's "decameron" and the text is entirely composed of lines sampled from other works, ranging from beatles songs to medieval poems to finnegans wake to what sounds like an imdb review. It's structured around Dante's Divine Comedy but what it's really about is the idea that there's this continuous dialogue going on through centuries of writing; people responding to or fighting against or quoting or misquoting or parodying each other in a lineage that goes from dante to boccaccio to chaucer and right through to james joyce and ezra pound in this huge bawdy cacophonous argument stretching across centuries. It's very funny and deeply bizarre and weirdly moving, and a lot of the mood in space funeral was very influenced by the strange rhythms and sense of discovery and unexpected linkage of this excellent book. the use of quotation and reference was something i thought was weirdly fitting for an RPG Maker game too with all the focus on rips etc, and proved to me that even when you were doing that stuff you didn't have to be tedious and dogmatic about it; if you pushed it far enough then it could become kaleidoscopic and exciting again, sort of like sampling in hiphop. the visual style of the book was also a big impact; a lot of gary panters work is based on the strangeness and grotesqueness of uh popculture characters. most of the book consisted of very stiff people moving up or down while keeping the exact same pose, which is (one of!) the reasons why there wasn't more animation in this game.

basically this was just a gary panter fangame all along lol so much for your 'originality' chumps *tosses dollars over shoulder, speeds away on vespa*
ferocious criminals and terrible momes

you will be given many mysterious offers on your journey

face skull crabs and your fears

the mystery forest has many ghosts and lions 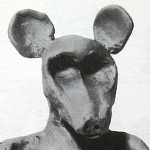 Close
01/20/2011 10:02 PM
The mummies are not my doing and are in fact result of a mysterious database virus uploaded to rpgmaker.net by a mysterious figure known only as, "Beast". To this day we have recieved little knowledge on the motives or whereabouts of "Beast"... his real name remains unknown.... police analysing this powerful virus have said that it uses a high-tech military software which is impossible to guard against... please remember my tale and be extremely cautious about this dangerous figure!
dosmaen
110

Close
01/22/2011 11:10 AM
congratulations catmitts! Space Funeral is now a "picked" game in the freeware database!
http://freeware.remakes.org/index.php?sl=&rand=0&order=latest
This is where I find a lot of cool games to play. good work! you did it! you beat the endgame!

Close
01/31/2011 03:39 PM
Surely what he calls our attention to this game is its retro look that comes to be quite unique for me because I'm quite used to seeing charts Rtp, Brazil!
treeghost

a lot better than being a wapanese kiddo
38

author=LockeZ
Guys, hiding the artwork is fine but don't hide what game it's for. I think that defeats the purpose. Also I think you should probably mail the author and tell them when you post something, since I'm sure most game authors don't check the forums.


why the hell am I doin' this
calunio

Close
05/24/2011 01:47 AM
Hmmm, I dig the retro feel: the graphics, the animation, the dialog, the sound effects and the music. It was very psychedelic and the world seemed quite nightmarish but also interesting. The monsters were also quite amusing and kinda creative. And there was quite a variety, so that the combat doesn't become monotonous. Their walkpaths were also structured such that it's a bit of a puzzle: you can choose to initiate combat or to avoid them.

My problem is that the writing was a bit disjointed and the plot didn't really start until on the raft to the Blood Cavern. Even then, the conversation on the raft felt a bit "out of place" 'cos it just came out of nowhere. Still, enjoyed quite a lot of the dialogues and it had a somewhat... nostalgic feel that bordered on silly and cheesy(which is what some of those old games were like).

The combat was easy to grasp and you only die once or twice, in the entire game. Still, what was the point of all those items if you didn't use any of them? Seriously, Philip reached Lvl 20 wayy before I made it to the snowy lands. That's 'cos I was never sure if I'd run out of money halfway so I grinded a bit.

And I loved the ending! :) It's not always the game rewards you by putting an ending, that completely turns the writing and the world on its head. =) If only we could see what Philip's parents were like! They looked completely hideous. =P
GameMater00
0

Close
08/20/2011 07:34 PM
Space Funeral was featured on a 1Up article on great free games! Scott Sharkey of the Retronauts wrote, "Space Funeral is a supremely weird RPG with attractively crude graphics, a great electronica/noiserock soundtrack, and a bizarre sense of humor. It's short and well worth a playthrough, and not just for the "What the HELL are you playing?" reactions you'll get whenever someone sees it over your shoulder."

Close
10/27/2011 04:20 PM
Your game was addet to pc gamer lithuania, thats how i found out about the game :)
its kinda like a nightmare, but i like it. I dont get the character crying idea tough...
BurningTyger

Close
12/19/2011 02:44 AM
I just played this all the way through, and it was seriously amazing. Easily the most original RM gave I've ever seen. I kept finding myself trying to find deeper meanings in every little detail of the game.
Reminds of a film from one of my fav directors, We Are the Strange.

Awesome job! It inspires me to want to actually finish a game.
Darken

Close
12/19/2011 03:08 AM
yeah uh, just wanted to pinch in again to say that I think back to this game a lot when working on mine. it's been echoed that the original intent of this game was to paint a glimpse on what RM games could be in order to deviate from a possible cloneofclone doom blob that the rmverse is heading into. I think it is working... slowly.
NOACCEPTANCE772

Close
12/30/2014 03:33 AM
Haven't gotten around to playing this yet, but just wanted to say the art style & concept has been really influential on my own stuff, so yeah. The graphics are awesome.
Combee Close
12/22/2015 07:51 PM
I loved this game! the end really through me off I wasn't expecting that! I also love the pixel style it's really fitting for the content of the game! Good work!
dakotaton
0