3 reviews
Save to Dropbox
Endorsements

a crazy, unchained game...and one that I would strongly recommend to anyone wanting to try something different for a change.
-ganonfrog's review

I had fun! ... The cut-scenes are very well done...I loved the humor and the quirky characters, not only the party members, but also the other people you will meet, love and hate! ... The Cerebral Symphony is a good game, not too hard and full of humor and diversions, of adequate length. ... Maybe I don't understand this game, but I sure had a lot of fun with it!
-TheRpgMakerAddict's review

Strong writing, clever system, interesting characters, and an engaging plot...this game is unreasonably good. It is probably the single cleverest thing I've played on rmn, and its ability to take itself seriously even while it's not taking itself seriously borders on the supernatural...some really phenomenal world-building and dialogue and mapping in kind of a weird package, and I think the community will dig it
-kumada (tester)

Overall I enjoyed the game because of the story. The dialogue is good, the characters are good.
-Link_2112 (tester)

-Begun as the side-project of a bored and depressed fifteen-year old, The Cerebral Symphony has evolved into a claustrophobic, poorly layed-out, passionately-written 2d RPG

-Please post any feedback to this game page as I am always tweaking and updating the download. If you send me enough, I will list you as a tester.

Brad, a jock, trips one day (at a party, we can only assume), accidentally plunging himself into the hallucinatory world of The Cerebral Symphony where he meets a guy called Ivan, who you might wonder is a human metaphor for repressed teenage angst.

Join the schizophrenic, multiple-personality-disorder afflicted Ivan, whose destiny (and personalities) you can steer through his individual choices as he bumbles his way through his life as a renegade thief into a big war between the underground cyborg Mafia, the omnipresent, all-seeing Corporation and the corrupt, power-crazed Government over the six elemental stones that, when gathered together, bestow ULTIMATE POWER on their holder. Mwahahaha!

On the way you will meet Liz the ADHD werewolf, Jean the insomniac minstrel, Catherine the telepath with a firey temper, Carys the delusional young stage actress, Robert the narcoleptic doctor, Zak the homeostatically-imbalanced fighter-pilot, and Bain the accident prone Gladiator. You will decide whether in the final estimation it is Ivan's more "upbeat" or his "darker" personality that will win control of his mind as they battle with his more balanced, "pensive" side.

Story-driven and choice-based, The Cerebral Symphony is a sci-fi/fantasy/drug trip 2d RPG game with an emphasis on character development and fun, non-random, side-view, Final Fantasy VI style battles, made up of 5 chapters.

Featuring the Fully Completed MULTIPLE PERSONALITY SYSTEM(TM), where Ivan's in-game choices will affect dialogue and plot, alter the screen tint and interface colours and change his battle class and music. You only gain skills in the personality in which you fight! Your choices will affect the story! Enjoy!

Two pieces of news. First of all, Halibabica will shortly be doing a youtube LP of TCS.

It has twelve heroes with distinct personalities who go on an adventure in order to carry out an epic quest, elemental magic, airships, battles, monsters, and a Cid! 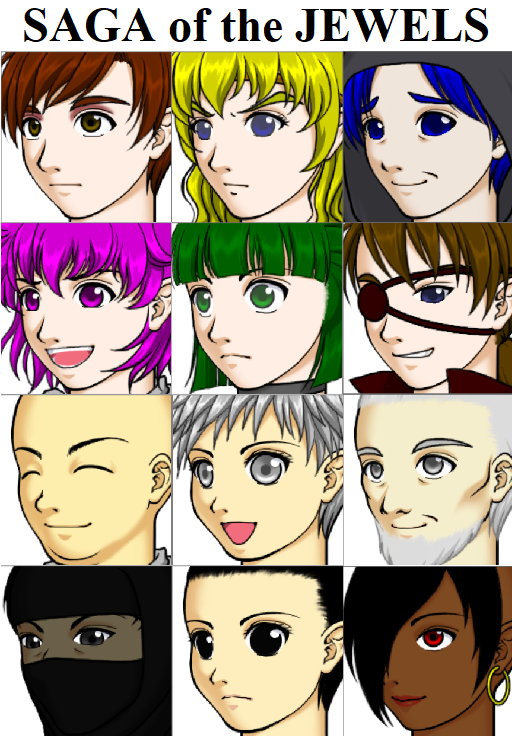 People here are probably in the small subset of people who might enjoy this, so if you want to read it, go here https://www.wattpad.com/story/228098139-saga-of-the-jewels

Peace out,
Faenon
Fighting the Auditor

Fighting zombies atop the train

World map PROVISIONAL - BETA version. As you can see it's sprawling, epic and immensely detailed.

(ugh I wish I could stand the FF6-type systems...)

author=psy_wombats
(ugh I wish I could stand the FF6-type systems...)

I know! If I could code well enough to not be making this with rpgmaker, it would be different. Unfortunately I don't have the time/patience/intelligence to make a CBS. But I hope my DBS mods and mid battle choices should make this a bit more interesting than mashing space-bar.

Close
09/08/2011 01:00 PM
I remember downloading it, but forgot to play it, I'll look into playing more tomorrow, morning work til 3pm. So I'll play for a little while tonight now. lol, yeah, the red system set hurts my eyes, and i got pwned in the first battle.
Faenon

Close
09/30/2011 10:11 AM
Ok chaps -benos in particular- I have reuploaded the demo now with the red system less harsh on the eyes and the upbeat personality much easier to play in the first battle. Thanks for your input on this benos and Creation.

Would anyone who was responsible for any of the 60 downloads the demo has had care to give it a review?

Close
09/30/2011 05:19 PM
It was ok, good points : the main character with his different personalities, the mapping's ok, the problem : no real story to hold everything together(I didn't play the whole demo).
Faenon

author=chana
It was ok, good points : the main character with his different personalities, the mapping's ok, the problem : no real story to hold everything together(I didn't play the whole demo).

You can't diss the story if you haven't played the whole thing! It throws you in at the deep end, right, but the context and interrelationships gradually unfold. Is there a part of the story you didn't understand?
benos
My mind is full of fuck.
563

But the red system set kind of brighten my eyes and hurts. At least I go back to pensive.

I remember I had to quit to go to bed and rest while dealing with the boss himself, so I ended the game, and now I had, the boss itself was easy. Just have to draw and use Luke's Psybeam.
Faenon

Just give me a heads up when the new version is updated.
Faenon

Close
12/08/2011 08:33 AM
Oh sorry -I reuploaded the proper Ch1 a few days ago and posted in the blog comments where our conversation was happening; I thought you would have got a notification about it. Other than that, Ch2 should be here by Christmas, though progress is slow :S
kumada
3769

-"one day, brad went on a drug trip" kind of feels like a weak opening line. Even just changing it to "Brad was tripping" would feel a lot stronger.

-writing starts off kind of choppy, and the first battle feels like it's jumping in ahead of the plot. Things smooth out immediately afterwards, but first impressions are key. Maybe a little more time to develop Brad, so that he doesn't come off as so much of a caricature, and a few more lines for Luke would go a long way towards glossing the reader into the game.

-the music is really quite good. Engaging and midi in a nice way. It's never abrasive, and it fits the personalities well.

-"you can tell what personality Luke is in from the menu color, whichwill change" needs a space

-"we are gathered here to pay tribute to the great god Serotonin" this game has some absolutely perfect lines.

-scripting different dialog for each personality must be a huge pain, but I freaking love the interactivity it gives the game. Kudos for doing that.

-after accepting the mission from Naomi to hack the bot, I wandered around town for a bit, but no one was interactable except for the robot vendors. Maybe have a "but thou must complete the mission" script railroading me into going directly after the bot if you don't want to do a ton of dialog.

-before going to see the bot, I wandered over to chat with Quoc. Triggered some dialog, which was awesome, but then my exit back to the town ceased to exist and I found I could walk through walls, which was less awesome. The ladder still worked, though, so I was able to get stoned downstairs, despite being able to walk through all the people, walls, furniture, and gently rotating penguins down there, too.

-it's the little extra touches that really make the game, and the "please don't leave me" when you go to quit is spectacular

-there's a ribcage I can walk through near the lower triangle of the map in the town before doing the bot quest (not sure if it's passable after doing the quest. Right now Luke's torso kinda seamlessly merges with it.

-some doors in town are not clearly doors. The one that leads to the robo vendors appears shut until you walk into it, and the one to the left by the save point (with the skull over it) is apparently open, but can't be passed through.

-On the way up towards where the bot quest was indicated to be, there's a door next to a save point next to a treasure chest. The chest is non-interactable, and the door doesn't open, but walking onto the save point jumped me into a cutscene with Luke asking to go to the Hive.

-when Luke is using the overseer to spy on the outside of the temple, the first thing it picks up is Snowy, and the next is the robber. Why weren't Luke and Naomi picked up? They entered through the front door. Maybe make the scene a little longer to prevent potential plot-holing?

-I really hope having to write down and remember phone numbers will not be an important system mechanic. It kinda breaks the player from the flow of the game if they have to go hunt around for a pen and paper, and then remember where the damn paper is when they forget about the game and come back to it in a month and then have to start from scratch 'cause it's an indie title with no strategy guide...yeah. Just saving you a lot of potential future headache, man.

-save point inside gobot can't be walked over. instead, you talk with it to save.

-I love the bios, but doing Naiomi's bio before her seeing the moon on the gobot roof kinda kills the surprise/foreshadowing you were doing leading up to her reveal as a werewolf.

-the big, wide open rooms with the security droids who can see you from offscreen? Yeah. Frustrating. Especially when mission score is a thing that matters. Drop their vision range, and change that janitor's dialog, or put up little blockers in the corridors of some of the major areas.

-the DJ's kickin' rig in the back of the club can be walked through if you approach it from the middle of the dance floor.

-not sure how I feel about the character portraits on the save screen. I know it's deliberate, but having them be kinda primitive is probably going to be lost on the audience, who'll think "wow, them's some hacky portraits" instead of "oh, that's a design decision."

-got to the end of chapter one. It's good, solid story-telling. There's certainly bugs, but no game-crash ones, which is respectable.

I like the system a great deal. The environments are carefully put together, although sometimes they just inexplicably feel clunky. I think this is because the game doesn't quite match the development software. TCS deserves to look way sleeker than it does, but I guess indie game design is really about making what you can with the tools at hand. Don't drop production on this because someone said it didn't look pretty enough. It's already an excellent game in its own right.

I know this is kinda a lot of feedback at once, but I typically go through and comment as I play, so this is basically all of chapter one at once. I hope it helps, and I'm definitely looking forward to the next working demo.
Faenon

Just give me a shout when there's anything in particular need of testing.
Pages: first 123456789 next last