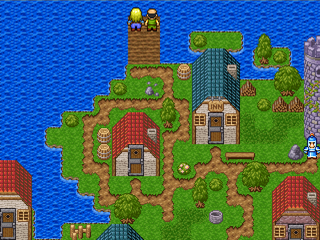 07/24/2015 11:30 PM
I'm attempting to create a game installer for my Golden Game Make contest submission, and because it is made with the new official version of RM 2000, the RTP is not yet available online. As such, I'm attempting to package the RTP with the game. After I choose a path for the installer and check "Include Runtime Package in Game Disk", I click "Create", it shows the progress bar and the archive path, but after it says that it's done, I go to the location where I told it to create the installer and there's nothing there. I've tried multiple times with different locations, but so far I can't get it to work and I'm not sure what it is that I'm doing wrong. So, my questions are:

Any help would be appreciated.

The issue was that I was using the Steam version of RM2k. I downloaded the stand-alone version and it worked.

01/20/2015 05:23 AM
Several months ago, I remember seeing a tutorial of sorts that explained how to do some interesting things in RMVX Ace, among them creating skills that would deal damage based on whether or not an enemy was already inflicted with a status condition, whether they had been hit by a different skill, etc. all from the damage formula box without any other scripting. Either the tutorial was on here or the link to it was on here, and after about two hours of searching through old topics, I can't seem to find it. Does anybody know where it went or which site it was on? I had it bookmarked, but my computer crashed some time ago and I lost all my bookmarks and saved pages in my browsers.

It's a new Fire Emblem title for the 3DS, brought about by the overwhelming and unexpected success of Awakening a couple years ago. While Awakening was scheduled to be the end of the series for the foreseeable future, the amount of money that Nintendo made and the renewed interest among the English-speaking fanbase has resulted in a new game. The biggest change visible in the trailer?

The game is now styled after Feudal Japan. Not Europe like in every other title. You now have samurai, mounted warriors wielding naginatas, and demons as well as monsters based on Eastern legends instead of western. Also, belly dancers that cast magic.

The game is already named in Japan as "Fire Emblem If", and according to some gaming websites, "Features a world that is much more largely impacted by choices made in the game", hence the title. It also features "The biggest challenges in a Fire Emblem game to date". I'm looking forward to this one, especially since the character models now have feet, load times for battle scenes have been reduced, and other enemies are visible in the background during battle scenes, so it's no longer a duel on a vast empty field.

And don't worry Europe and Australia, it's probably coming to you too.

05/13/2014 02:58 AM
I learned from the Humble Bundle that Final Fantasy III (Original NES III, not screwed up North American numbering III) is coming to Steam. It's more or less a port of the PSP version, which was a port of the iOS version with enhanced graphics , audio, and quick-battle, which was a port of the DS version with enhanced graphics, which was an actual remake... But this time, it has Steam Trading Cards and Steam Achievements. If you haven't yet played the original Final Fantasy III or one of its many remakes, this may be the most enhanced enhancement yet, and could be something for you to look into. Here's a link to an article with screenshots (the screenshots could be from one of three different remakes for all I know. All but the DS one look alike.): http://www.vg247.com/2014/05/09/final-fantasy-3-is-coming-soon-to-steam-for-pc/

Who Wants Some Steam Coupons?

03/01/2014 06:34 PM
After crafting several badges over the past week or so (made possible by a foil copy of a RMVXAce card), I have a bunch of coupons that are expiring in a few days, and have no intention of using them. So if anybody wants them, I have the following:

If you want any of these, add me on Steam (same username as on here) and just let me know which ones you want. Absolutely free, since they're just going to expire in my inventory. First come first served, and I'll try to keep this updated as they go.

12/03/2013 06:17 AM
So, I'm thinking about starting work on a new RPG VXAce game, and wanted to make a game similar in design to the Etrian Odyssey and Class of Heroes series. For starters, I always liked the amount of customization in those games. In addition to that, they seem to be a pretty easy game to make in terms of design and functionality. But before I start, I wanted to get a general idea of what people do like and what they don't like to see in this type of game. Of course, I've already got a few things in the "Don't" list, like excessive grinding and confusing map/interface layouts, and some stuff in the "Do" list, like character customization and optional sidequests.

A quick overview of the key differences I'd be having that could render some complaints obsolete:

- I wouldn't be doing the dungeons in first-person, so confusing mapping wouldn't be as much of an issue.

- As the game gets further along in completion, I'd be replacing the default material with custom graphics, so "RTP Quest" and recolored elemental enemies would be avoided.

Anyways, I wanted to get some feedback on the overall genre so I can avoid making a game that just pisses people off. I've got about three or four weeks of thought and some planning into it, so I have a pretty general idea of what I want to do, and want to be able to make changes based on the feedback before I get too far into it to do so.
Pages: 1