Close
Due to situations beyond his control, Ben has more idle time than he should have! "Hands" are the devil's playground and as such Ben is often drawing or diddling around in RPG-maker VX Ace to give his life a semblance of actual meaning.

A social introvert, Ben is NOT a social butterfly! However, he still desires to create forms of expression which incite genuine emotions, raucous laughter, and occasional deep thoughts. (Though often enough he misses that mark and ends up offending everyone instead!) 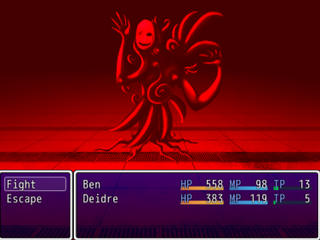 08/15/2013 04:00 PM
So here's a hypothetical. Say a friend has windows 7 and I have windows vista. When I compress the game I use the usual rpgmaker vx ace method. When my friend goes to download my game he cannot.

My question is, is rpgmaker vx ace effected by the operating system? Aka, if I compress a game with windows vista as my os is there a possibility someone with windows 7 might not be able to download my game?

This is based on an ongoing discussion I'm having with shun. No matter how much shun tries to download my game he comes up short. I'm trying to find a way to help but so far I've been pretty clueless!

08/10/2013 02:21 AM
To clarify, I uploaded my game at gaming front due to technical problems when trying to upload it here.(Perhaps my pc just sucks?) For the first 28 or so downloads everything worked great.

However, Shun notified me of an issue and when I clicked on "download" again it would not take me to the download on gaming front and instead said. "Oops, there's a problem. Chances are we know about it & we're working on it!"

First of all, is it considered "bad form" to upload a game somewhere else? If it is, why is the url option offered to begin with?

Secondly, if it is a technical hiccup would deleting then reposting the same url remedy the situation?

I apologize for being annoying but as a noob I'm still learning the ropes!

08/08/2013 03:36 AM
Another page of dumb questions, I'm on a roll tonight! Anyway, when it comes to VX Ace which is better, uploading a zip or uploading the blue cube exec. thingy? I ask because there have been debates saying the exe file is the wrong thing to use & that a zip is ideal. Is that true?

Oh, when I try to download either the blue cube or the zip version it says "connecting" and keeps that way seemingly forever. Am I missing something?

08/08/2013 01:48 AM
Imagine my joy when I read about 45 minutes ago my game was accepted! To say I'm grateful would be putting it mildly. Words alone cannot express how happy I am.

However, there are a few problems. First of all, I noticed even when my game demo is compressed without the RTP it's 352 MB. Having read posts on rmn, I know that is within regulations BUT that most people here prefer daintier download sizes.

So what are the culprits? Whelp, there are a lot of midis,custom sprites,custom character portraits, and one additional tile-set that was added. (The futuristic tileset enter-brain offered on their site to be precise. I bought it awhile ago.)

Do any of you know a way to safely compress all this down even more? Are there any audio converters that convert midis to Ogg vorbis format? Lastly will the present size dissuade most of you from downloading?

Admittedly, the demo is rather large. There's a tram,town,hospital,theater,dark forest dream sequence, and police station that are all 100% explorable. Aka, I'm not just giving you all a couple of interconnected rooms to diddle around in. lol.

I figured I would ask before putting the game up. Better to be safe than sorry!

08/05/2013 03:22 AM
First of all, sorry I jumped into other topics before introducing myself. I don't think there's a legitimate reason to be afraid of me though. I'm harmless and I'm a pedestrian with no automobile to attempt vehicular manslaughter with!

So why am I here? Mainly because I want to share my games I make in rpgmaker vx ace with other creative people. As such, my "motivations" aren't going to stand out as being very original.

Anyway, it's nice to meet you all! (Awkward silence)

08/05/2013 02:45 AM
I'm not as good of an illustrator as I want to be but it really helped me when designing my rpg. I sort of got a feel for my characters before they were even put into rpgmaker vx ace and that's a good thing.

My female characters ended up being a lot more believable and less sexually fetishistic in the actual game when compared to these original concept pieces. I think that is actually progress.

I apologize ahead of time for any bad or exaggerated anatomy you are able to spot. However, I hope you get some enjoyment out of my humble works regardless!

Lucian's original concept as a grim-reaper. Due to constraints based on time and me being only one guy making an rpg, Lucian was bumped down to a mysterious cab driver. Hopefully he will not kill me for that!

Lawrence was suppose to be a security guard who believed in whacked out conspiracy theories. His affinity was earth and his other special power was burning calories from foods he ate to increase his strength and endurance. Sadly,Lawrence did not make the final cut. A shame too because I love "every-day guy" protagonists!

Raymond is awesome but finding a character sprite that captured his likeness was nay impossible! Originally he was supposed to be a paranoid hacker & inventor who made robots to protect himself from hunters who went after supernatural individuals.

The heckler and nurturer, Liam is there to keep everyone from taking things too seriously. Supportive and optimistic, he is a contrast to Ben's more cynical and withdrawn mannerisms. Because Liam was Ben's best friend and was important to the main story arch, he made the cut as one of the 6 playable characters.

It was lucky for me there were werewolf sprites out there because otherwise Dwayne might have turned out to be something else! Athletic and cooperative, Dwayne rounds out the 3rd male member in Ben's trio. Though Dwayne & Ben have a history of pinning over the same girl(Kara), they have resolved the rivalry amiably for the most part.

Drawn to be "wizard-like" Ben looks like he borrowed his fashion sense from 80's Metal bands, Harry Potter, and Guilty Gear! Despite his sharply dressed (Though outdated) sensibilities, Ben is not exactly the best people person. He often laments he's not as funny,world wise, and charming as Liam nor as athletic, forthright, and valiant as Dwayne. As protagonist go, Ben has a lot of issues that he needs to overcome. He's a work in progress!

Kara is a bit of a solipsist. By that I mean she's guilty of being self absorbed and is annoyingly competitive when her popularity within society's hierarchy is concerned. Calling Kara a "sassy snarky bitch" wouldn't be far off the mark but deep down she's a warm,caring, and somewhat sexually promiscuous individual. So, what's up with the bee motif? There "is" a reason for that but I'll let you play the game to figure it out!

Despite being drawn like a sexy somewhat psychotic cosplayer on roller-skates, Deidre ended up being shy,aloof,cynical,and defensive when she came into the game world itself. A survivor and a loner, Deidre been through some pretty dark experiences. Ben often refers to Deidre as "A female version of myself only with snappier and wittier one liners!". She bonds with the other characters mainly out of the necessity for self preservation. However, Deidre does have a heart. It's just very well guarded.

Ben's younger sister, Amy became a celebrity and even got to travel the world while pursuing an acting career. Unbeknownst to most, she was taking lessons from martial arts grand-masters on how to better defend herself. An expert at acrobatics,parkour,kung fu,linguistics,survival, and archery, Amy can be a charming debutante, dangerous killer,or slippery escapist on the flip of a dime! Before leaving Gutter-delve, Amy was pursuing a romance with Liam. The question is, what deep rooted vivid fear pushed her to such harsh extremes of self improvement?

When playing Persona 3 Fes, I was going through my "Female robots are awesome" stage. Aegis was the culprit for my attitude at that time. ANGI (Artificial Nanite Guided Intelligence) was meant to be one of Raymond's creations or perhaps a "hidden artifact" Ben's father kept stored away until a desperate situation would call for her activation. ANGI is so cool and I really want to use her but I'm still not sure I want to bring in a 7th playable character.