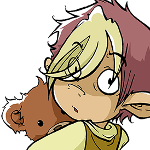 Close
A homegrown indie game developer with a penchant for β-carotene-laced verbosity.

author=bulmabriefs144
Oh, I thought it was a horror about Easter.

Easter is a perfect time for people to be rising from the grave, and you could play this for all it's worth.

But who names their kid Easter?

Hahaha, you definitely wouldn't be the first to think that. I've probably confused quite a lot of people with the name. In my head, it's because he was born on Easter, so his parents named him that. :)

author=NoBody13
Thank you so much for replying! Now that everything makes sense, I can die in peace (just kidding XD)

Show
I did watched the "GameStation Portable" but I didn't quiet understand. So, (correct me if I'm wrong) Nester did nothing wrong/bad, right? Like, that one time Easter left him with his father at the arcade, he did that, just because he was always the one who got abused? What a great brother. He hurt his friends just beacause they didn't do anything about his situation? I mean, did they even know about his father? Nester has all the rights to hate on him, the way I see it .


Anyways. As I already said, I loved the game overall! I personally prefer this type of horror over those games with ghosts and stuff. But that's a personal opinion. For those who like a more "realistic" horror, I reccomend this game. I can't wait for your next game to come out! Thanks for replying again. Keep up the good work :)

Show
PS: So Olie is a guy.. Interesting, haha

No problem! I love talking about the game and the story :)

Show
Yes, Nester never actually did anything wrong in real life, but he (obviously) grew to resent Easter not only because of what Easter did to him but to their friends, as well. Basically, the difference between the "True" ending and the "Retribution" ending are whether Nester decides to forgive Easter. In the "True" ending, he forgives Easter, but Easter ends up killing him (Easter's so messed up he doesn't really understand the consequences of his actions until he realizes that Nester is dead and he's all alone). In the "Retribution" ending, Nester takes revenge on Easter and lets all of his built-up hate turn him into another version of Easter and their father. In a way, the main story is more about Nester than Easter when I look back on it lol.

And yes, Easter is not a good person at all. All the abuse basically took away his ability to care about others, so he's really messed up. It's not until the moment in the "True" ending when he realizes Nester is dead that he starts to feel something again, but by then, it's too late, and the doctors take away his ability to feel anything at all.


Thank you so much for all your kind words and for giving me a chance to talk about the story, ahaha. I'll do my best to try to make my next game be even better (and also to make sure I actually finish it lol).

author=NoBody13
I played the game, and I must say you did an amazing job! The atmosphere, the sounds, the graphics, the animations! I mean, this is your first game right? It's too good to be your first one! Good job! There are some things about the story that I don't understand though..

Show
I had "the normal ending". I watched the other endings on yt and I can't figure out when Easter hurt his friends (like Nester said). That one ending when Easter strangled Nester was so confusing. Did Easter do all the bad things in the house to his friends? Or was it when they were kids? Was he the one wearing the mask? But then again, Nester almost killed him in the kitchen.. Was it really him, but he wanted to forget, so he actually did forget it? I don't get it. Last thing, who is Mr. Fishborn? Sorry, maybe I missed something and it caused all this confusion. But other than that it was amazing! I noticed just now that there are hands on Easter's shoulders in the game's image. I guess, they are his father's?

Btw, my favourite character is Muggy!

Thank you so much for playing the game and I'm so happy that you enjoyed it!! I like Muggy, too, ahaha. He's such a motormouth.

As for your questions:

Show
Everything that actually happens inside the house is, indeed, a dream that Easter keeps having, which is why it's a mixture of all his memories and his feelings of guilt. Basically, the things that HE did as a kid are all reenacted, just in different ways, and Nester was the one who always knew what he was doing and grew to hate him as a kid, so in the dream, he's the one teaching Easter and his friends a lesson (even though, in real life, it was Easter that did all the things). Did you see the part of the true ending where you play Easter's "GameStation Portable"? This is where it shows what really happened—how Easter was the one who gave Muggy the bleach, Easter that lured Totl beneath the arcade, and Easter that took pictures of his dad's affair with Olie's mom, all of which are what led to Easter's friends getting hurt. The mask, too, is from his memories, as it looks exactly like the smiling pendant that Nester made for him at school.

Mr. Fishborn is Olie's dad. Ahaha, this was one of the things I realized wasn't all that clear and why, in the new 2.0 version, I added three new scenes to the ending. Now, in the true ending track, you can see flashbacks of exactly what happened to each of Easter's friends following the things that he did, which I think will help explain things better (and you see more of Mr. Fishborn here). Olie's mom was having an affair with Easter's dad, so Easter figured out a way to pay his dad back for everything he did to him by photographing them and leaving the pictures in Olie's house. Mr. Fishborn was already depressed because he recently got laid off, and then he sees the pictures and goes off the deep end. He kills Easter's dad (this is the kitchen scene you see in the "Bonus Stage" of the "GameStation Portable" part), then returns home and kills Olie's mom. When he notices that Olie saw him, he crushes Olie's eyes (this is in one of the new scenes in the 2.0 update).

I hope that helps! I made the game to potentially have different interpretations so that people could try and guess what happened and come up with their own theories, but a few of the things were still a bit too vague, which is why I added the new scenes in the new version.

Also, Olie is a guy, ahaha. But people are free to think of him however they want to! He's a bit androgynous like that. I don't mind if people think he's a girl, too.

author=AnimeGirl
For the new Ending can you put a hint in the Guide as you did with other key things?

I'll update the guide with this!

author=ToSoonBeDead
Okay, so I came back to this game today completely by chance to be greeted with a new update! I just wanted to say, I love this game, and I'm excited to hear you'll be working on another!
However, if you don't mind answering a question, there's been one maybe kinda dumb question that's been on my mind since I first played the game.
Show
When you're in Muggy's flashback, Easter is trying to say something to him. I have never been able to string the words together to figure out just what he was trying to say, and it actually originally kept me on that screen for a long time. I might just be dumb, but boy, I really want to know what he's saying because I wanted to hear all the dialogue in this game.

Thank you so much!! It makes me all sorts of happy to hear that people enjoy the game. I hope that the update will be able to add a bit more to the story and characters. And yes, slowly, but ever so surely... another one is in progress. Just hope I'll be able to follow through lol.

And as for your question: 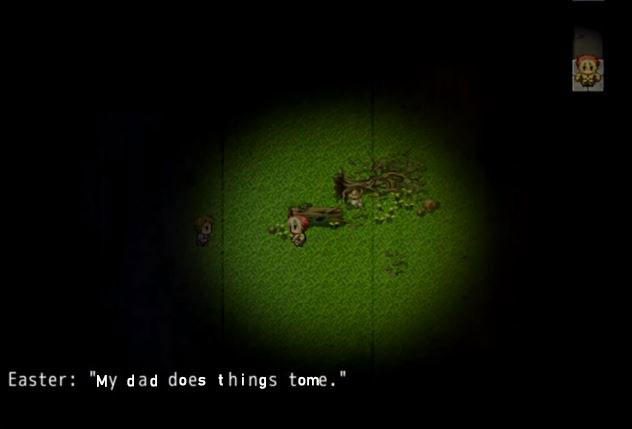 It's never outright said in the game, but one of the reasons Easter takes our his aggression on his friends (besides the fact that because of his dad he basically stopped feeling empathy) was that they all didn't do something to help him (even though they're just kids, so... of course they wouldn't know what to do).

author=Tar-sama
Oh dear.... I shipped them so much... dran Nester and Easter.
Show
omg wait! I just realize they are brother!! adafsafsf

AHAHA!!
Show
Yes, that's a bit of a kick in the shorts when it's revealed, lol.


Thanks for playing my game, and I'm glad you enjoyed it! :)

02/15/2019 10:52 AM
Wow, thank you so much for this wonderful and kind review. Thank you for playing my game and I'm really glad that you enjoyed it! :) Ahaha, I enjoy coming up with interesting names for my characters. I feel like it makes them more memorable.

I hope to eventually develop another better game using what I learned from making this first game. You learn quite a lot from going through the whole process and getting feedback from players!

author=AnimeGirl
I'm at the other end of Germany.

I got all 3 "Keys" and it looks like the true Endling.
But what you mean with that?
14. I got past the default ending, but how can I get two different endings from here?
o You’ll be given a choice. You can either do what you’re asked or… don’t.

I got nowhere something were I can make a Choise.

Have you gotten to another set of ending credits?
As for the choice:
Show
The choice happens in the room when Nester confronts Easter. To get one of the endings, you can do what he tells you to do (kill him with the tweezers). To get the other ending, don't do anything after he tells you to kill him. Instead, just wait.

author=AnimeGirl
I see I have an older Version 1.05 that's it.
Another Thing. I can't figure out the Password. Btw. I'm from Germany.

Oh, good! That's a relief from my end. Was afraid something was acting up in the game. If you want, you can download the most recent version (the one here on RMN) as it'll have a few other fixes besides that, and you can just copy your save file over.

As for the password...
Show
...try killing Easter (or checking out a vid so you can see the game over screen without having to do it yourself). There should be a very interesting series of letters and numbers there that you can try out... :)

Also, hey! I'm actually in Germany myself! I currently live in Berlin, though I'm originally from the US :D
Pages: first 12 next last