Does anyone know if there's a fix for this? Thanks!

10/27/2018 09:22 PM
That might work, I'll give it a shot. If not, I can try having a fixed event in every x amount of maps that the player has to go back to rather than the exact death position. That might be less tedious on the players side anyways. Thank you!
(Sorry for the late reply!)

Any idea if it's possible to have an event appear where the player died? I tried storing the players X and Y in a variable and having an event on each map that would activate on the death event, however the problem with that is every single event in every single map will activate, since there's no way to determine the map the player died in.

10/21/2018 06:18 PM
Hey, I'm looking to create a death scenario in which, after the player dies, their items, weapons, and armor are stored inside an event, which they can find and reclaim upon returning to the location of their death. Is this something that's possible?

07/29/2018 10:48 PM
For anyone unfamiliar with this script, it basically adds a bunch of really neat options to the choice system. You can have more than four choices, choices will scroll up in the box when there's more than four, and choices can be lengthened to be longer than one line, to name a few of the features. (Link to the script.)

Here's a gif to illustrate the issues.

Does anyone know if this is something that would be possible to fix?

06/14/2018 09:51 PM
I started a completely new project, and it still didn't work. After that I tried creating a new event instead of copy and pasting my old one, and it works just fine. I'm completely baffled as to why, as there shouldn't be any differences in the two events. I copy and pasted the script call from the old event to the new one, so it should function exactly the same. The only difference is that the old event did have a few other event pages, however they were inactive at the time, only being accessible through a certain switch which was turned off. All I can assume is that this is some weird bug. Thanks for the help, everyone.

EDIT: Alright, now that I'm getting around to actually to trying this method out, I've noticed it's a bit wonky. After entering the correct name into the prompt, it'll simply exit the prompt without activating the conditional branch, until you do it a second time. I'm not sure why this is, but a simple work around I found is to add a one frame long wait command in between the first script call and the conditional branch. It should look like this: 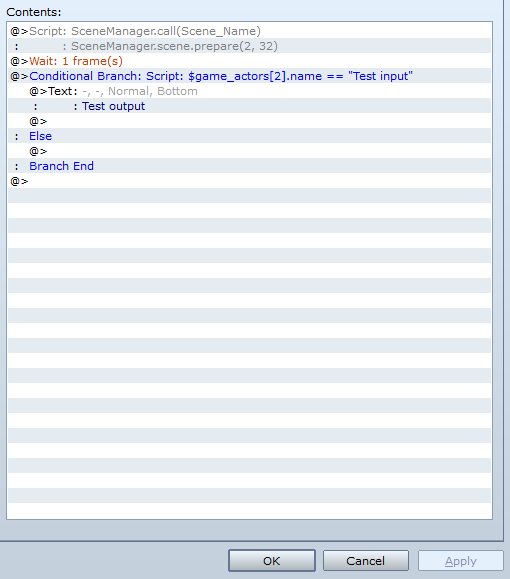