Just Dropping By To Say Hi

Well I've disappeared for quite a while ever since I got a new full time job and things got extremely busy. Looks like the game hit 3000 downloads mark while I was away, soooo hooray!! Good to see the RMN community is doing well as usual. Anyways, just wanted to drop a line about what I've been up to, and upload some art I had laying around that I forgot about before I got busy.

Hope you all have a good day!

I don't usually make an announcement when I update the game, since I do it quite frequently with minor changes, but this time there's quite a few!

-all character battle sprites now hold a different weapon graphic depending on what they have equipped!
-added some extra sprite poses for cutscenes!
-game launches at double window size by default
-can use F5 to toggle window size and F6 to toggle Fullscreen with normal ratio
-added keyboard info in Settings menu and start of game
-some skills used by characters now have a cooldown of 1 turn
-added some new accessories and new consumable item "Salkamarian Wine"
-added a few new animations and changed the icon of some weapons
-added some extra dialogue, minor mapping changes, and minor enemy behavior changes
-added extra info in Status menu to show Next Level to Unlock New Skills
-updated some audio files and old sound effects
-various minor bug fixes

Come watch live streaming of the game by HawkZombie, a twitch streamer, who streams other RPG Maker games as well!

Let me just give a big THANK YOU to everyone who has downloaded and played my game! I really appreciate all the support, comments, and feedback that I have received from everyone who gave my game a chance. I know 2000 isn't that huge of a milestone, but I don't think I'll be hitting another one any time soon, so this felt like a good time for a special blog.

I first came up with the idea of LOI2 almost 5 years before I even created the project file for it. I was trying to finish up the original LOI at the time, and I began to have a lot of ideas for LOI2, some of which I began to tie in to the latter parts of the first game. I started to become more interested in the story I had in mind for LOI2 than even LOI istelf, but I was struggling just to finish all the work required for the first game, so I really never thought I would actually make a second game. I even put a sort of secret trailer for LOI2 at the end of LOI, but I'm not quite sure how many people found it.

Over the next few years, I would often listen to some rpg soundtracks and such while working on other things, and sometimes I would hear a song a think to myself, "this music would be great in the X cutscene of LOI2!". I think music may have been the greatest source of inspiration and motivation for me to come up with ideas for LOI2. Eventually I just couldn't bear leaving my ideas in limbo and officially began working on LOI2. I think that was almost 5 years ago now.

It was a long and arduous journey to get to this point, and it hasn't always been easy. When I first "finished" and released the game a couple of years back, it wasn't quite as well received as I had hoped. There was some positive feedback, but there was also some big flaws with the game, and some bad reviews set me back as well. In general the game just didn't quite meet the expectations set by the first game.

At first, I wasn't quite sure what I could do. I made some small changes based on the feedback I received, but there were still some major issues I couldn't get around. I hoped that it would still be good enough, and that maybe some people would see past the flaws and appreciate what I had made, but I didn't get much results. Eventually, I was resigned to just leave the game as it is, to be finished with the project, and focus on other things.

Then around last summer, I found myself with some extra free time and playing some more RM games. I played some games that were pretty highly acclaimed, which were very enjoyable, but sometimes I noticed some pretty huge flaws as well. But even despite these huge flaws, I agreed with many others that they were high quality games. It made me really analyze how the positive aspects of these games were able to completely overshadow its flaws, and helped me to understand some of the important things that I had neglected or taken for granted. I began to feel really inspired and suddenly the ideas began to flow into my head very quickly, and I began working on making changes to the game once again.

Then last October, I had finally done enough to release a new version 2.0 of the game. But even then, I wasn't quite satisfied and so I continued working on it, tweaking, changing, and adding things, and releasing many small updates, almost every one or two weeks. Now here we are at version 2.071, and though I'm mostly done with it, I will probably still make some minor updates once in a a while.

It feels great to see the download count keep going up, to see all the comments and feedback, and to see the reviews get progressively better, to finally a five star review. It really feels like a small bit of validation for all the hard work over the years, and the blood and sweat poured into making the game. It's still far from perfect of course, but it's very satisfying to know that there are people who enjoyed the game as much as I could have hoped. It always puts a smile on my face too when people make speculations and theories about the storyline.

To all the fellow game makers out there: Don't get disheartened if your game isn't well received at first. You can still turn things around! Just keep working hard at it, and you will get better and better! Whether it be on this game, or the next game, or on another project, as long as you keep making things and learning, you will improve! Don't just stand still and do nothing, because everything you do will give you valuable experience. Even just playing other people's games can be an incredible source of inspiration and a great way to learn as well! So take a little time to play other people's games, leave some comments and feedback, because you'd want others to do the same for you too, right?

So let's all keep working together and supporting each other, and making awesome games! Cheers!

Version 2.070 is now available, featuring full OGG/MP3 audio quality. Some midis were replaced by OGG/MP3 versions of the same music, while others were replaced by new music selections altogether. If you are copying your saves from an older version, please read the notes at the download page first, and follow the instructions.

Also, I've just created a Facebook page for the game, and the link can be found above the news section. In light of the recent impersonations of rpgmaker games/creators on itch.io, I thought it would be a good idea to start putting up some official social media pages and announcing them.

Thanks for reading and playing!
Edit: The facebook page is down for now and will be fixed later.

Version 2.03 is now available for download:
Save files from Version 2.0 onward are compatible, as far as I can tell, although there was some minor changes to some maps, with a few walls and trees moved around. 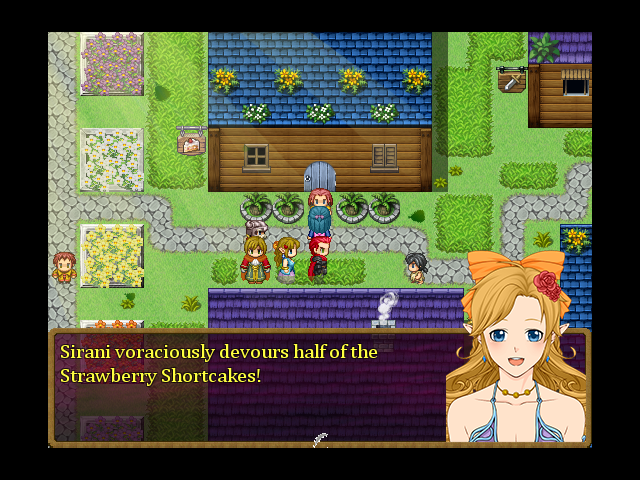 -added animated bust graphics for text messages! =D
-added some better NPC dialogue, including some banter with heroes
-added some extra scenes in the ending
-adjusted difficulty and stats of some monsters
-more early bosses no longer immune to some of Moshran's debuffs
-minor map changes, added 1 new item, and other minor fixes

Legends of Illarion 2, version 2.0, is now available. I've made a lot of significant changes in many areas. The two biggest differences are the addition of a few major subplots, and some gameplay changes that make it a LOT more streamlined and easier to spend/reset Skill Points. A lot of little visual and audio improvements have also been made. Some of the details are listed below.

Story:
-There are now two new major subplots in the main story, and now includes 200% more treachery and deceit =)
-Some minor changes to the main story and some name changes and many extra scenes
-More character development and some of their thoughts and motivations are made more obvious
-Added a few more minor sidequests

Gameplay:
-New "Reset SP" and "Auto Spend SP" commands that can be used from the Skill menu at any time. This makes it MUCH easier to switch between weapon types and skill types to change fighting strategies
-New Crafting command from the main menu, so you no longer have to select individual tools from the item list
-Some significant changes to some character's abilities. Added new abilities and removed/combined some less useful abilities.
-Made the difference in damage gap between single and AOE spells bigger and more obvious
-Added damage numbers to skill descriptions to give a better idea about the relative power of skills to one another
-Added or tweaked some items, stats, spells, and battles
-Added new item to allow changing normal battle themes
-Added new item which helps players prepare better for upcoming dungeons
-Added some NPCs which gives more hints and advice
--Added some new obstacles and mini-puzzles and tweaked some of the old ones

Visual and Audio:
-Added battle Voice Clips for each character's skills! =D
-Added new custom weather effects
-Some changes to battle backgrounds, enemy appearance, and alignments of fonts, numbers, and bars
-Some changes to title and menu appearances
-New visuals and sound effects for finding valuable treasure
-Separated weapon skills by type and added individual icons for each skill
-Added visual names on the world map
-Tweaked and improved some of the battle animations
-Added, deleted, and changed some music

Miscellaneous:
-Reduced file size for some images and music
-Some event changes and extra utility scripts to reduce lag in some areas

A new version of the game has been released with some major updates and changes based on user feedback, including the following:

Skill System:
-By popular request, it is now no longer mandatory to learn skills from both weapon types for each character. You can stick to only using one weapon type for the whole game if that's what your heart desires
-New Passive Skills available to be learned
-Increased initial SP for some characters
-New options to reset skills and SP distribution
-Adjusted damage and cost for some skills

Stats Rebalancing:
-Increased overall stat gain per level up and adjusted growth curves
-Adjusted some monster stats and reduced overall time for regular encounters
-Adjusted the stats and cost of weapons and armour
-Weapons now give stat bonuses at level up

I just wanted to mention that I've created a new page called Boss Guide and I've also uploaded a new version with a very minor bug fix, which is fully compatible with previous saves.
Pages: first 12 next last