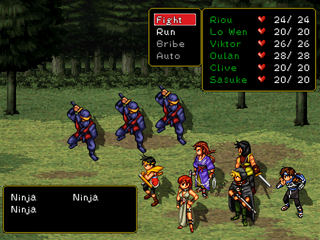 author=cradth
What happened to your project? It's beautiful, almost perfect in every aspect, at least to my taste.

It still going on. I did a couple of side stories last year, just to let you experiment something before the release. I just never finished them. I'm working on a little something that is coming out really soon. It will be playable :)

Thx for your comments, I appreciate!

author=WorldDoubleFace
For anyone who creates a game, you know exactly HOW it is to be a one man army...

I certainly do, to a degree. To be fair, I'm not using assets from Suikoden like this game is. However, I know from my own attempt at making a tribute to Suikoden that there's a lot going on under the hood. Having recruits register with the Tablet of Destiny, marking them as "dead" if (when?) need be? The shops whose inventory expands with each other shop you visit? These things were tough to figure out by themselves, much less stuff like Unites. Which were their own headache. Though, to be 100% honest, I don't know if Unites work the way they would be expected to!

Unites is a thing you can easily achieve with Victor Sant battle script. It has never been implemented with Theolized.

This kind of actions are a way too hard to script. You have to cancel actions from the other members. The script has to know which characters are linked together and has to cancel all other actions if one of them use Unite.

To be honest, it is easy with Victor Sant but his battle script is a mess, and there are so many things you have to put away. Theolized is the best battle script on VX Ace and by FAR. (That's my opinion tho)
I found a way to implement shift command, pretty much like rows switching when a character dies but this is what I have done by myself using switches and variables. Changing coding in Theolized too.

So ... They are 2 things I have to let down for now. Unites and actions done all at the same time like in suikoden. Tbh i think is a great thing but geez it is a mess where is hard too see your actions.

Even if I'm using sprites from a game. It still a huge work to do. You have to create a file for every single sprite. It takes hours and hours to do. 108 characters plus all NPCs plus all poses and more.

05/30/2018 01:33 AM
To say to me that I'm already taking suikoden 2 graphics, I know that already guys I put ALL copyrights to Konami, the real owner of this game. But rpgmaker.net is a community with good people and honest people willing to help others!

The Arena is available

author=Marrend
In regards to showing all the equipment slots on one screen, well, it might take some moving around. I mean, there is some space to extend the window down, but, I don't know whither or not that would be enough space to show another inventory slot. If it's extended both up and down, though, which probably means re-aligning the status windows on the left, it might work.

You mean equipment slots ? Well weapon isn't supposed to be there tbh. But it counts as an equipment type and removing it cause conflicts with other scripts.
I'll resized the window to add other 3 if this is what ur saying

author=WorldDoubleFace
For now you can always press page up/down.I'll add up/down arrows tho

Yeah I was wrong , I was talking about swapping characters during the equipment scene