Close
I'm a webcomic author. One of my webcomic stories is going to be in the form of an RPG maker game.

12/03/2020 05:20 PM
One of the things that I've learned over the years of drawing some pixel art, is that, to animate very small movements with very small resolution, you have to use color instead of form. Changing the color of a single pixel in a 24x32 character's arm will give the illusion that a small part of it moved.

I think you can see this in, say, Final Fantasy IV, when characters cast spells. Their hands change color, but it looks like they're moving or twitching.

10/03/2020 12:35 AM
I've been playing a lot of Pokemon over the past 3 years, ever since a co-worker recommended it to me. Pokemon grows stale the same way Uno or Poker or Chess grows stale. It's all about how you play it.

At the beginning, it was fun to play with what are essentially hundreds of playable characters. But that soon became boring after I played through most of the generations. The stories are tailored for the intended demographic, young teens and children. Within the past year, the most fun part has been organizing pokemon to take on the difficult Battle Tower that exists past the end of most of the games, where you are put to the test in configuring what the games are all about: the pokemon.

Each pokemon is a puzzle that needs to be solved. Sandslash has excellent Attack and Defense, but awful Special everything and bad Speed. Mawile is part of two good Types, but has bad attributes. Liepard is very fast and powerful, but frail. How to maximize the efficacy of each one? Maximize their strengths? Cover their weaknesses? I have had success with both.

The great thing about most pokemon is that there are multiple ways to configure each one. Boltund has equal Attack and Special Attack... one of its Abilities is Strong Jaw, supporting the Attack, and another of its Abilities is Competitive, supporting its Special Attack. You can make a set of moves for each one and try them out. Sudowoodo gets Head Smash, which has recoil damage... but, it also gets the Ability Rock Head, which nullifies recoil damage! Then, which Item do you go for? It's hard for it to get old.

The recently released Isle of Armor module for Sword and Shield introduced a game called Type Restriction Battling, where you're only allowed to use pokemon who are part of a certain type to try and win a string of 5 matches in a row. I've been spending time building up teams of 3 pokemon that I've never used before, to try and take each type's challenge. It feels really great to discover an effective strategy by choosing a combination of Moves, Abilities, Items, Effort Values, and Natures that all work together in harmony.

08/10/2020 03:26 PM
Wait... Before you scrap your work, have you thought of creating a simple "Wait 0.1 sec" loop, and having the loop exit only when a certain key is pressed? (Although, I don't know if it's possible to create a loop in the battle event commands, or if you can even check for key input there.)

What you are referring to is the database, the data for which is not stored in the .lmt file, but the .ldb file (easy to remember, since "mt" stands for "maptree" and "db" stands for "database"). Both are called "RPG_RT", so you need to pay attention to the extension at the end there.

You need to copy over the RPG_RT.ldb as well, from the most recent version of your game that you have.

If you want to go to heaven, make sure you're at least level 65 because the monsters in that area are BRUTAL

The comments that we read in the default RGSS code scripts are probably his.

author=Craze
Ocean! I've added some custom stuff but none of it's in this shot 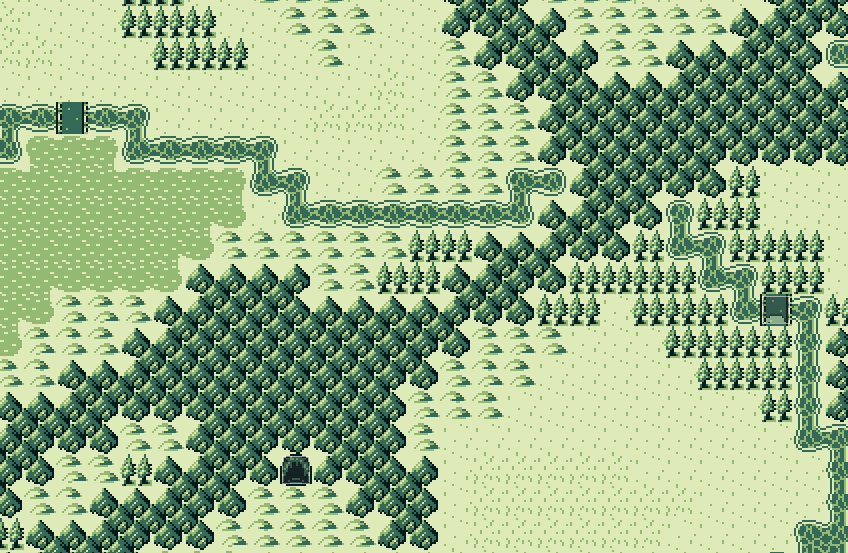 over those green hills ~

I know that you're all about the gameplay aspect, but have you thought about tackling the interface design challenges too? (The resolution is way too big for the Game Boy, which would force you to reorganize how all of the data is presented to the player in that much-smaller space. It would even influence the map design, since the player couldn't see as far.)

Is Trump even Human?

05/16/2020 05:27 PM
Half of the reason that people voted for Trump in the first place was because he represented an unknown quality. People were (and still are) sick of everyday political mire, so they needed a fresh prospect.

Well, that prospect turned out to be not so good. It was a breath of air, but not fresh air.

As annoying as it is to go back to the way we were before, the air is more fetid than ever. We should at least get Trunp out of the White House. Like, we need to tackle the dialysis before we can get to the kidney transplant.

Super wish there was a way to do color cycling in RPG Maker. What a shame!

05/09/2020 05:39 PM
Unfortunately, there is no built-in palette animation, but it's reasonable to do if you're emulating an old-enough system that has few colors. It's a bit of work, though.

In one of the RGSS makers, you have to make each sprite a portion of the sprite that has its own color. This is easy with GameBoy or NES sprites (3 colors, plus that invisible background color which doesn't count). Then, you give them the same dimensions and put them all in the same place, so the sprite is really a bunch of separate sprites, each with their own color. Then, you give the sprite its own homemade palette data and just cycle those sprites' colors according to the palette data. (Or, you can cycle the palette data itself and just update each part's respective color.)

In the 320x240 makers, it's more difficult, because there's no .color attribute. You have to jump through more event command hoops. But I think it's still possible. Using the "Color" property in the Move Picture settings is awkward, though. And you have to keep track of which color settings you're using.
Pages: first 1234567891011 next last