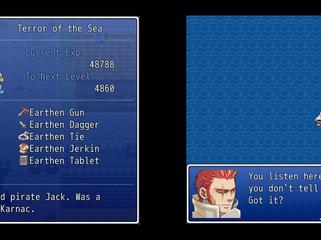 First, Talk to the mayor of seaside, then talk to his wife to spawn the first bandit camp.

After you destroy the first camp, go back to seaside and find the house with a male merchant and a female merchant, talk to the male to spawn the 2nd camp.

After you destroy the second camp, go back to seaside and find the house with a woman and a guy wearing a red bandana. Speak to the guy to spawn the 3rd camp.

After you destroy the third camp, go back to seaside and speak to the weapon merchant to spawn the 4th camp.

After you destroy the fourth camp, go back to seaside and find the house with an orphan and an old man. Speak with the old man to spawn the 5th camp.

After you destroy the fifth camp, go back to seaside and speak with the mayor to spawn camp six. 11/03/2016 12:30 AM
If it's people like this that have made you stop working on the game, then I just want to tell you that I'm sorry it came to that. This game looked awesome and I'd probably have played it. The amount of work must have been immense. It sucks that people like this will look for any little thing they can to cry racism/sexism in a FAN MADE game. For god's sake, all they do is whine and complain having no idea the amount of work you must have put into this game. If she really wanted to play a borderline sexist game she should have played mine, that would have given her a wonderful tumblr blog, hahaha!

01/01/2016 09:49 PM
Thanks, I'm glad you both enjoyed it. I am curious to know when you downloaded the game. Which version did you have? The older version had 15 board dungeons and I reduced them to 9 board dungeons. I also reduced enemy max number from 4 to 3 and a bunch of other things in the latest version.

Lately I haven't felt like working on it. There's just so much I want to do, but I know that it really isn't possible with the generic graphics. From the ending, you know that Karnac is... not well, but I don't have the graphics or battlers to depict an afterlife or monsters in it. Basically, the story is restricted by what I have, and I don't like that.

Point is, make this different from all those other cliche ones.

10/21/2015 04:29 AM
1. Click your profile name in the top left corner
2. Select manage games
3. Scroll down to the bottom of the page and select your game
4. There should be a unique bar to the right of the title of your game. Click downloads from it
5. click add download
6. Give it a name, choose the file, write the description, then submit it.

10/20/2015 03:49 AM
Wow, you did an excellent job with your feedback. Shayoko Very helpful to take screen shots instead of just saying, "your game was dumb because it had spelling errors" but never actually showing me where they were. Kudos to you for sticking it out and giving me some good stuff to work on when I get free time. I'll even add you at the end of the game as "Shayoko: OP Grammar Checker". As for Olan, I think I stated that it took like three days to get there by ship and a few weeks to get there by foot. Unfortunately, it doesn't feel that long, I know. Actually, a few months pass from the first mission to the end of the game. For a guy as powerful as The Robed Man, that's ample time. Also, I am really glad you showed me those spots where I didn't add the bottom of a bookshelf. It was mentioned before, but I had no clue where it was. Nice idea to have compact maps, I'll use it. Worthless orbs should be powered up, I agree. I actually agree with a lot of your points, but not a whole lot I can do to stop the random battles... that's a JRPG in a nut shell.

On a side note, was it really that painful? lol.

09/26/2015 03:06 PM
You should check out my newest patch. It's a pretty big game update and I think you'd appreciate some of the changes. If you guys think of anything else I need to work on changing, I'd be glad to do it.

Patch notes are on my blog

Also, it was actually my first game, and I think you can really tell it. I was experimenting with things and learning how to map and stuff in the first few hours (Valan to Capitol). Then when I got to Olan I sat down and really thought about where I was going with my story. The story is kinda cliche when you hunt the orbs, but I wanted to use Ifrit, Shiva, and Rammuh and that's what came to mind. Then I experimented with long challenging dungeons, but that is a NO in the future, lol.

I didn't realize my game was that hard, but since I created and play tested, I knew what to do, what level I should be, what move was best, and all that lovely jazz. I did a lot of silly things that I really shouldn't have done, like for instance, I kinda judged the difficulty of 3 monster encounters as the precedence for a "challenging" battle and assumed you would just run from a full 4 monster encounter and other stuff like that. Probly shouldn't go assuming stuff like that in the future, lol.

Also... Spoilers about Olan much? haha!

I'm glad you praise Karnac so highly, but come on now, I tried to make all of them have good dialogue! Stop mashing that button and read, lol!

*The Robed Man is not the same guy from the scene at the beginning of the game. That is Shadow, a powerful assassin who was with Kildran before he became the False King. The Robed Man is a "wizard" that joins Kildran later and helps him after he is initially losing the war. Then he takes Shadow's place as right hand man to Kildran and starts commanding the armies.

*The guy they fight in Olan is Shadow, not The Robed Man. You fight The Robed Man at the end of the game after you have all three orbs.

But I can do the following:

*lower encounter rates and monster difficulty
*lower boss difficulty (Yes, even for mimic's)
*increase gold and exp rewards (I'll need to replay the game to re-adjust this)
*condense later dungeons (try to cap at 7-8 map max)
*increase Larz's heal (I meant for you to use it after fights to heal up... there I go assuming)
*make Gaurd actually viable (It's just bad...)
*balance fighting better
*add a tutorial to explain the fighting (it's simple really, think of Poke'mon)

I am definitely going to redo the first couple dungeons that I've already done in the second game, and apply this feed back to them. I also got some good feed back from a few other people, so I might just go ahead and do what they suggested in this big overhaul.