I am the main artist in Fallingstar Games. Me and my gamedev partner Angie Solomon (along with Rhesus and a handful of others properly credited in our first game) work together under this label and so far we've released her first game together, Fiora, and have been working on A Snowball's Chance and Outsiders of Thunder City. We're hoping to continue working on more games in the Grand Aurelian Anthology in the future. 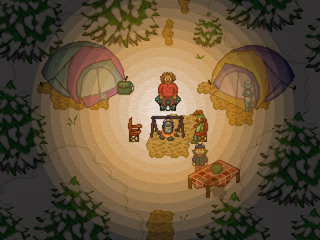