An Owl in the Night

0 reviews
Save to Dropbox
It all started on an auspicious December night in Charcherry forest. Tempus, a magical nonbinary temporic from another dimension, was sitting atop a roof, looking up at the stars. It was then that an owl stole their most prized possession: a nautilus shell given to them by their long departed friend countless years ago.

Upon being awakened by a disturbance in the forest, Thoren, a reformed time-traveling mass murderer who died and was reborn as a robot, gets up to investigate.

Owls will be encountered, gender will be questioned, and connections will be made.

This game is an owl game made for the year of the owl year-long event. Development started during the 48-Owl gammak event and resumed in the latter half of the month. All graphics are drawn, using a style very similar to that of Unfinished Stories and 21 Years, also drawn by the same artist.

This game takes place after Dead and Breakfast but before Between Time and Space.

HOLY SHIT WE WON A MISAO 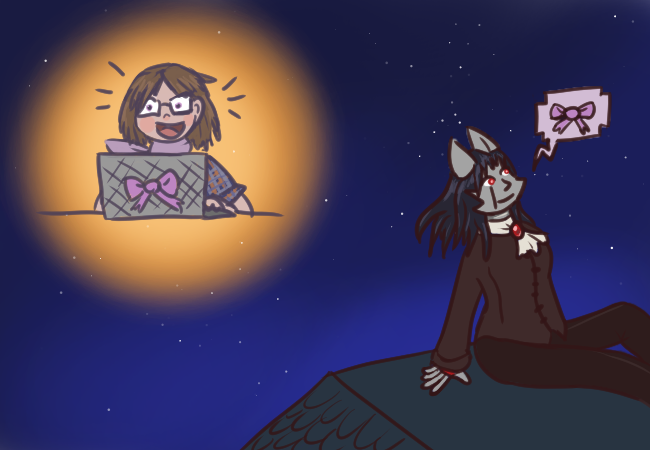 LS: Hey Thoren!
EF: ...what is it? Is something the matter?
LS: Far from it! Our game won a misao! Best owl game!
EF: it did?
EF: Wait, what's a Misao
LS: Some kinda game awards thing on the website I posted our game to.
EF: I see. Do we get a trophy?
LS: Probably not, It's just a thing on a website after all.
EF: Not even a trip to an award show?
LS: I doubt it.
EF: Then what do we get of this?
LS: Fame and extra exposure I guess?
EF: All of a sudden I am feeling somewhat nervous.
EF: That was a rather intimate moment in my personal development chronicled through that game, after all.
LS: Hey, it's not like we're gonna get hit by an angry mob or something, right?
EF: I can only hope we are safe from such wrath.
LS: Oh yeah, before I close this chat window, did you ever get Raine the big meatball?
EF: I got her a moderately sized meatball. Covered in melted cheese, of course.
LS: Nice.
LS: Anyways, I better let you get back to wall-charging or brooding on the ceiling or whatever
LS: Goodnight!
EF: Goodnight, Nick.
EF: Also, it's the roof, not the ceiling.

Thank you all for voting for this game in the misaos! This is the first Misao I've ever gotten (to my knowledge) and it feels great even just getting this one.
Here's to another year of gammak!
(Make sure to check out my other games too!)
-lavendersiren

Close
10/19/2020 05:04 AM
Just played this, and though I do not really understand a lot of the background, I really liked the characters and story.
Additionally, I attempted to determine exactly where I could find the story behind of this, but did not succeed in this. Is there a specific point where I should begin? I actually played How To Get A Rise Out Of A Cat first, which I also greatly enjoyed. For all I know, not fully understanding the background is intentional, but then I would need to know that.
lavendersiren

Close
10/19/2020 11:49 PM
Ah yes, the background lore... there's a lot to unpack here, as there is a LOT of stuff this is built upon.
First of all, if you wanna get to know Thoren, I'd suggest reading their diary, located here: http://jingloria.wertercatt.com/lostpawns/diary1.html

In terms of games, Sethstuck is one of the more solid entries, back before Rise transitioned. https://rpgmaker.net/games/9105/
Its approximately like, 3-4 hours long, and mostly features Rise and their alternates, but it does feature Thoren briefly.

If you wanna get deeper, there's a let's play of Link's Awakening which takes place directly before the events of Sethstuck, located here: https://letssosl.boards.net/thread/32/play-legend-chronos-seths-awakening
Thoren gets wrapped up into this tangentially, though its mostly Rise on their adventure here, reflecting on their past while stuck in a 9-month coma. It is 25 very long forum pages long.

Pinegrounded, a rather short fan-adventure, also ties into the story to some degree. http://jingloria.wertercatt.com/pinegrounded/0001.html
Its 82 panels long.

However, if you wanna know more about Tempus, I have a story that I wrote but haven't put into anything beyond a google doc: https://docs.google.com/document/d/1Z6acnJpjtWlT6l1CQlQzEkfwD8WCkc5xKjbd5IclYfs/edit?usp=sharing
Its a lot more compressed compared to the sbarg lore and reflects it in a lot of ways, and is 41 pages long.

If you have any questions or want to search for more content, just let me know. In the meantime, you can also check Thoren's twitter, which is still on-going, though is being used by Rise while they're away on their quest to fix the homestuck epilogues. The prologue to this is located here: https://lavendersiren.itch.io/none-pizza-with-left-beef , and I'm planning on releasing chapter 1 by december. (update, it has been released, and there's also a second chapter located here https://rpgmaker.net/games/12128/ , as well as an ongoing fanadventure on mspfa currently in the wintermission located here: https://mspfa.com/?s=38989&p=1)

Thank you for taking interest in my games! :D


EDIT: oh yeah, forgot to mention, this is all based in a homestuck rp setting that kicked off with the SBARG ARG and continued with the SBARGv2 rp, which was largely hosted on pesterchum. If you need a link to most of the pesterlogs, a friend of mine collected a ton of them for archival purposes.
After that was the SBARG 1.5 Lost Pawns rp, which was a sequel/interquel to sbarg and sbargv2, and is where the vast majority of the Deep Lore goes into play.
That wrapped up a few years back and now its continuing on discord as SBARG 2.5 Dungeon Crashers. Archival logs have not been grabbed for this yet, but weekly newsletter recaps are written.