1 reviews
Save to Dropbox
Story Synopsis
Millions of years after a devastating incident in a world similar to ours, humanity strives for survival against the planet's own evolution. Explore the dimensions and the continuums of time and space in this hybrid of fantasy and sci-fi.

Fight with magic, swords and knowledge. Explore and understand, discover the real face of the world.

THE Captain's Log #67 - I should electrocute my nipples and see if that makes me get back on pace >:C

So I guess that everyone here has felt that thing. You do stuff, you go to sleep knowing that your gam is slightly better than before. Then wake up, go to work, take a shower and cry, eat your rabioles, the usual. Then look again at gam when you have the time (sometimes 3 days after because life ia a bih). And there it is. Nothing changed since last time, you say. Start feeling depressed, sometimes close the editor, go cry some more, come back and watch some Abridged Yu Gi Oh.

You know if there is something that we are not grateful enough is for Little Kuriboh's constant drive. He's almost finished with Yu Gi Oh Abridged (while beating cancer btw), and yet there I was thinking "WOW LK Y U SO SLOW HAHAHA". Get a pair! This game is cancelled! Ok no, let's keep the composure.

Anyway, what have I been doing? Stuff. Let's start with a video. ROLL IT!


--OH yeah before I forget, hi, The Captain speaking!

I shared that video around in the Discord thingie, but I should document a bit here every once in a while, to remember myself what things I've been doing. And because I like to write dumb. So this is basically a couple new functionalities for the diary thing, basically. You can now pick a mission entry, whichever it is, and filter based on other entries related to it. I'm trying to do something more like Morrowind's diary, where you still documented stuff chronologically so you can see your whole travesy, while also adding nice filters to help you guide yourself through the huge dumps of information. I hope it's good.

There is also a lot of work put into maps and stuff, from improving them to making new ones. One of them is the new town of Ardmore, a small rural town full of farms.

The windmill from the outside.

And here it is from the inside. Something spoopy will happen there woooo (not really spooky but whatever).


I like to add those animated pieces here and there, so the map doesn't feel 100% dead.

There is also a prototype of a mine in Fierro but that's super unfinished. Will mention it again when I do progress on it.

Another town that has received a lot of facelifts is Syrinx, the town with the coliseum.

Some takes from the new market. I think it looks decent. 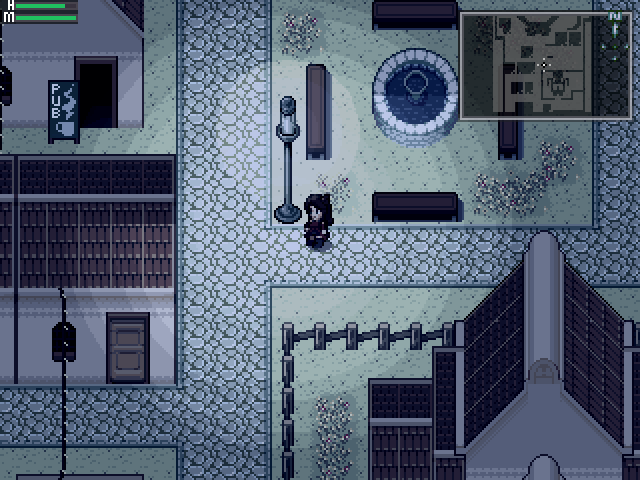 Some improvements to lighting, had to look a bit on blend algorithms, mostly trial and error.


There is a lot of other places where I did small improvements here and there, but those I think are the most notable, I already shared them as images a long time ago, but yeah, just wanted to recycle stuff.

Now, battles have received quite a lot of updates recently. Besides bugs, they're systematically the same. I've just spent some time polishing their looks.


The new scan not only should look a bit less horrible, but also accomodate information in a much cleaner way. Before I had some super small floating window, which usually had lots of issues with positioning, and was very cumbersome to use (Left and Right to change between the microscopic pages). After a while of having to deal with it I realize I didn't like it at all as it felt horrible and looked even worse. So I did a new approach more in line with some Final Fantasy games (especially 8), of course adapted for 2D.


Then the battle camera. I'm still working on some stuff related to it, but hear me out. Again, ergonomics. I felt that the battleground was not only very static but it was also feeling kind of claustrophobic. I've been thinking about this for a while, was gonna use it for cool techniques, but decided to start implementing it on regular day-to-day battles first and see how it felt.
What's the thing that has caused the more issues? Well you see, you know that battlebacks aren't instantly bigger. And I kind of overshot it just in case. So now battlebacks are twice as wide. 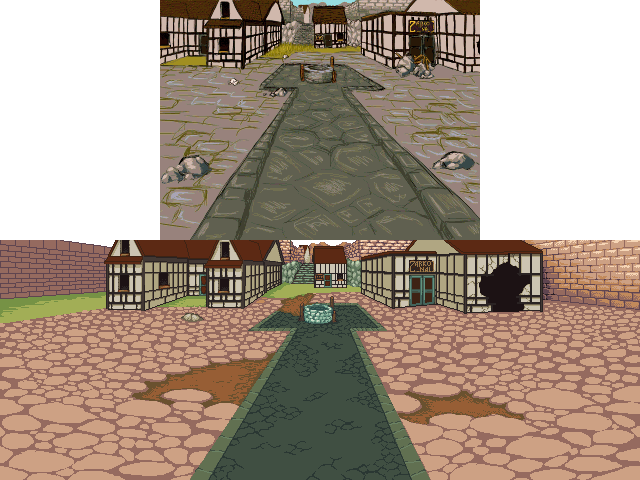 
Some of these battle background required a complete redo, like the example above. All of them required to be expanded, but some that were too old and were done in digital painting, I decided to finally bite the bullet and redo them while I was on it.

I hope however that my overshoot means I don't have to come back to this. I don't want to do more city background with like 4 or 5 different textures and lots of houses with their own stuff going on.

Finally! The part I've been neglecting the most, story progress and things related to that. I've done very little of that, honestly. Got some scenes written but I still gotta revise them a bit and throw them into the game. I've also added and improved a bit some other scenes, to add a bit more context. I'm trying to shoehorn some character development so the start doesn't feel as empty, carefully of course, so it doesn't become a pile of ass.

In other news, I also got a couple new songs thanks to a friend José Gutierrez, you can check them here!
https://josegutierrez.bandcamp.com/album/drekirokr-dusk-of-the-dragon

And that's it for now!
Some update. Lights that help while going through the cave.

Before: Breath-taking experience. Now the characters can breathe with ease.

Own Ectasy. Thanks for subscribing =D!
And a little note, since I don't like small posts...
This October 31th I will try all my best to have a trailer. There's TOO much stuff to do for a Demo (I HAVE demos, but are THAT old...).

So, stay tuned! cheers,
Orochii Zouveleki
benos
My mind is full of fuck.
559

Close
10/22/2011 01:02 AM
Nope, they're customs. Not edits nor anything like that, made from scratch.
EDIT: Although there is something I am still changing, that is the chipsets. In the menu screen I posted, the scene behind the menu is made with M&B chipsets :B. It was sort of placeholder (originally it was there to stay, but ambitions changed =DD and I wanted to do the chipsets, and the "new" charset style differ greatly too).

Close
10/31/2011 05:25 AM
Well... I'm not going to have the trailer for tomorrow, I'm going now to the 11/11/11 (EDIT: I'm not going to post more promises. But fear not, you will see a demo someday even if hells freeze and I die). I'll take this time to get some more chipsets done (this week was VERY prductive, I finished two of them, considering that I'm in college and don't have that much time lol). And to give last tweaks to the two backdrops I have in process (and give some to the lava cave too).
If I continue like this, I'll have my demo much faster yay!

Close
10/31/2011 05:58 AM
Some of those artworts are really nice, I particularly like the big one of the woman with the hairy skeketon head, walking in the countryside, though I don't understand quite what she's carrying in the right hand?
(your link to deviantart does not come off as a link, it would be easier to reach if it did).
orochii

Close
10/31/2011 02:19 PM
I'll fix that then, you're right, the link code makes things easier.
And the thing on her hand was supposed to be a kind of bow, BUT it was my first attempt drawing them... Someday I'll try it again, and making some "previous practice" heheh.

I'll try to make some "update log" or something too, that blog has no entries since 2011 haha (that's more than 2 months!).

I just registered but I knew about this site before. As a matter of fact, I downloaded plenty of games from here and most of them are really good, and, best of all, they are opened for all of us to investigate and learn.

Greetings and the Festimaker 2012 is coming very soon!
Livewire

=DDD thanks for that.
redwall10

For what o.O?
Remember to ask on the forums if it's something about the program. Ask by here only if it concerns to the game developing. And I say this because... well... this game has no download, dunno how could you need help reading and watching images, the only things I have now "released". And so, your question confused me x'D.

Anyway, I'm so glad to see this game has come such a long way since its early versions. Custom graphics, custom systems... That's quite an accomplishment! Now I just hope the actual delivering of the story has improved too because I remember it being rushed and "all over the place" in the last demo I played. xP ...Also, subbed!
orochii

Anyway, I've been writing dialogues and guidelines on text files, so now I can check stuff much easier (I'm the cleanliest man in the world too!).
I always have all the stuff in mind, but it's hard to notice things to be changed just by brainpower xD.

So expect a complete overhaul! In all aspects, even sounds. I've been lurking around in Freesound, and making some recordings myself too!
The_Stillborn_Child
0

Close
11/21/2014 12:32 PM
Looks very interesting! You drew my attention when you said that you based some of
your stuff off of Touhou Mother. I'll keep an eye on it.
orochii

Close
11/21/2014 02:44 PM
Yep, I was watching an LP of Touhou Mother, and I liked it. I always take note of things I like.
It's not like it resembles it or something, more specifically talking about characterization and story. Although there could be some things. Easters, maybe?
Pages: first 12 next last