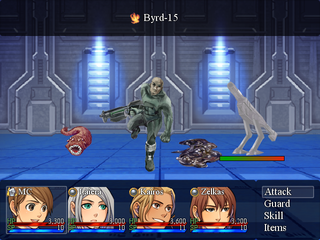 Build the perfect group of fighters and traverse through ten different types of dungeons in order to gather data needed to save the planet!

There is a patch of dirt near the cave entrance that's different from the rest of the ground. All you have to do is stand on that spot and by hitting Enter/Z it'll allow you to use a key item there.

It'll probably be my last edit until the contest is over.

I get what you mean about a lack of backstory in the game; I sprinkled little things here and there, but there really wasn't much place to dump a lot of backstory on people, as I feared it might get in the way of pace I had set for the game.

If I get anywhere in the contest I may just make this more than one episodic adventure; everything would be clear as the story kept going, since they stumbled upon the very corp they've been on the run from for about a year.

06/10/2014 11:22 AM
Thanks for the kind words. The whole grid-like look, partly inspired by the original Tron, was the spark that made me want to see this project through.

Now I notice a lot of my stuff is like, super blue.

Time to take my exit.

If you don't want people trying to persuade you to return, you wouldn't explicitly tell them not to. You put a lot of time into your stuff and it did in fact show, so it wasn't a waste; be more confident about your work, unless you want to think writing is a waste too later down the road.

I understand what you mean; I know I wouldn't do something like that in my full length game in the works as it would totally break it; I'm actually surprised more people didn't tell me about drowning everything. It's one of a few strategies that really break the game's difficulty, and there for people clever enough to find it.

The final boss and optional bosses specifically block Drown even with Douse transferred to them to prevent it from being a complete drownfest xD There's also a few other class combinations that break everything it touches though, there for people willing to truly find the "Perfect Team" as it were; it's even possible to kill off the toughest hidden optional boss in one turn without causing instant death.

I'm glad you still love the game though! Even though drown is totally intended for people who put the right skills together, I still might change it a bit to make it where it doesn't work 100% of the time.
Pages: first 123 next last