Close
Heyo, the name's KrimsonKatt. I'm a young game dev from mideast america and the creator of the Chronicles of Chronicles series. My gender is confusing and it's better we don't talk about it. Call me whatever, I don't mind.

I also have a wiki. It would be nice for you to contribute. I also like anime and animated movies. I hope you enjoy my games. Have a wonderful day, nyan! 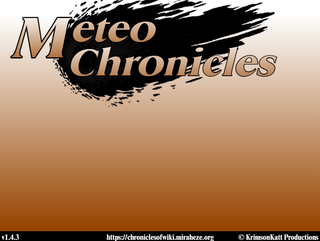