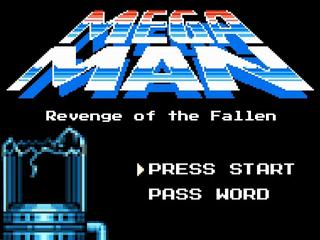 Mega Man: Revenge of the...

A action-based platformer based on the classic 8-bit Mega Man games.

10/24/2015 01:42 AM
I am looking for a dedicated programmer who is perfectly willing to put the time in to be a co-developer of a game or two I have in mind. By co-developer, I mean you will be in a close-working relationship with me but you will remain in your role as programmer and my role as designer, level editor, etc. We'll exchange ideas and if good, will be implemented into the game(s), but the sole lead will be me. It worked once before with Megaman: Revenge of the Fallen, this working relationship, it'll no doubt work again. Just thought I'd put that out there up front so there are no illusions as to what you'll be getting into.

Now onto the request: I am interested in producing two uniquely different games, both are basically fan games but one has the better potential to break away from that mold and become its own entity and become something original and kickstarted and sold commercially.

Let's start with the commercial potential game: It is, at its core, a Mega Man clone, similar in nature to Mighty #9 but harkening more to a classic NES/SNES style gameplay and look/feel. The depth of gameplay will stem not just from the weapons you acquire from bosses but their movement abilities and patterns as well, allowing branching paths and secret items to become available as a result. Also considering a bit more open world in design with intermixing of levels between the selectable bosses. Since there is no engine yet to build this from, it would have to be done from scratch and then once a solid base is formed, tilesets, enemies, platforms, gimmicks and bosses could be programmed. More details will be revealed for those who inquire and the full work document once hired on. This can begin as a Megaman clone, but with new graphics, music and gameplay elements tweaked, can become something else entirely and those involved can all stand to profit from it.

Now onto my own personal project, for those who may have been keeping up with my extracurricular projects, I've created and built a Magic/Pokemon-like CCG (collectible card game) with a core set of 136 cards. (Link: https://www.facebook.com/media/set/?set=a.678884498810463.1073741830.100000667582828&type=1&l=9ee44d9080) My goal is to translate this into a simple game engine (very basic, for those who have played Triple Triad on your phone through an app, you know what I mean) where you play matches with opponents with successively harder tiers. Each match/tier opens up new cards to buy from the shop. There will also be a multiplayer component (peer to peer I'd imagine) where you can play against others with your fabricated decks. So a programmer who is willing to build the engine and the multiplayer framework as well as computer AI that is flexible within the parameters I'd like to alter would be great. Since this doesn't have a potential of becoming commercial, I'm willing to pay a bit out of pocket for this job. I'm not rich, so thousands isn't going to happen, but in the hundreds is negotiable.

Now the first question is: "What have you done already? Do you have anything to show? Why should anyone help you if you've got nothing to show?"
You're right! I have nothing to show....of these two games, since they're all planned out but nothing put to keyboard and mouse. (I'm no programmer, two fail-outs of college programming classes proved that, that's where I know my limits and I'm asking for help.) I usually have done things on my own and created many things by myself but only recently where I need outside help to complete my ideas. So to prove all the things I have started and accomplished, here is a link to a creator page listing everything I've done: http://tvtropes.org/pmwiki/pmwiki.php/Creator/DarkFlameWolf Hopefully that proves that these won't just 'fall off the map' and be forgotten about. I do tend to finish everything I start, but in this instance it is by the assistance of others that these two will get finished.

So with that out of the way...are there any takers?

05/06/2015 06:28 PM
i have the graphics I'd need. I have the entire rule set and game planned out. I might even have a music person. I'm lost however when programming adaptive AI for a collectible card game (CCG) battle system. The only thing I have going for me is that the opponents will have fixed 60 cards decks, randomly drawn up to 5 cards at a time in hand. The rules are rather complex but nowhere near Magic the Gathering monstrosities. Just enough to make it seem daunting. I haven't the foggiest how to program this or which engine would be best or if there would be a soul willing enough to make my next game a reality. Suggestions or help would be most welcome.

rm2k3 map exporter (that does events too)

03/08/2015 07:27 PM
I know about Cherry's Hyperp2 which has a map export function, however a lot of my maps are event heavy to extenuate detail and some could not be made without events, however if I export using Hyperp2, it removes all events which makes it look incredibly weird. Is there a map exporter out there for rm2k3 that can do this? Thank you.

02/03/2014 05:27 AM
I'm looking for a good sprite artist who can translate 8 individual walking charsets into 8 battle charsets complete with various status effect graphics. Please respond or PM me if you need more info. The type of edits shouldn't be too extravagant actually, more like minor edits that may be tedious. If you can help, please respond. Thank you.

01/29/2014 07:44 PM
It seems I see more and more RPGmaker games up for Kickstarter these days. Using standard RTP materials and even materials that I know are custom, but not theirs. But it seems more Kickstarter RPGmaker games are cropping up and they are getting the funding they need. Is this a new trend? Is this legal? What do you all think of this type of indie game funding utilizing RPG maker?

01/30/2013 11:45 PM
I'm trying to figure out what the EXACT download link is to one of my game file uploads I made. However, whenever I right click on the download buttons to find a 'copy location' it doesn't give me that option. So how can I find out where it is physically located? Thanks.

12/07/2012 01:25 PM
I am currently working on Megaman: Revenge of the Fallen game here on rpgmaker.net, however I need to find the MM10 falling rain animation. The one you find at the beginning of Wily stage 1. If anyone is willing to rip that for me, you'll definitely make it into the credits of the game for helping me find it. Thanks for any assistance.

10/13/2012 02:16 AM
I know Hyper Patcher has a option to pick any map within a project and push out a screenshot of it. There is only one problem, Even though it renders the first and second layers of the map, it does not render events. And since a big portion of many of my maps involve events, it ends up looking really weird when they are left out on the screenshot. So is there a program out there that can render both layers for rm2k3 games AND graphical events? Thanks for any assistance!

07/04/2012 11:34 PM
Okay, my current setup is this: At turn we set a variable to the summoner's CURRENT MP.
We then have a battle page that gets activated when the summoner uses the summon skill subset which then turns on a PHOENIX switch.
This new battle page activated by the PHOENIX switch then sets a all-purpose variable to the current MP of the summoner, then it subtracts the summons PREVIOUS current MP from the most current and checks the value. If it matches with the unique MP casting of the Phoenix summon, it activates the next section, which is where I'm having trouble with.
Upon getting the correct MP value it casts a summon battle animation on all enemies not once BUT TWICE. I have no idea why it does this. It then properly removes the wounded condition from all dead allies and gives 500 health to each as it should after a short...pause which seems odd. The pause I'm not TOO worried about, I'm more concerned with why its playing the summon animation TWICE and not once. And yes, I only use the 'show battle animation' command once. I tried it on all enemies, then on individual enemies, to no avail. It still plays it twice. What is going on?

06/21/2012 02:04 AM
Okay, I got the skill working pretty flawlessly except for one thing...it repeats itself twice when an enemy uses it and I HAVE NO IDEA WHY. I'm going to paste the code below and its a LONG image graphic, so scroll through to see it all. As for the nature of the problem, it usually goes like this: The enemy casts it, a switch is turned on to activate a battle event page, you get a wait on each character as the animation of the skill 'attacks' them, then you get the damage done and if Sasha is in the party, a chance to increase the skill viewings to potentially learn the skill. It all works...except the final part, the switch turning the damn skill off! On ANY character's NEXT turn, the skill REPEATS itself, does damage a SECOND TIME and THEN it finally decides to want to turn off the switch which activated the battle event in the first place. It occurs the same way every single time. Why? What's the fix?