...maybe I'll have something interesting to say after I start testing.

author=halibabica
It might've been too hard for W4, but this is in W7 now. Would you be more comfortable if some of the donuts leading to it were the sturdier type? I can swap out the yellow Koopas if you want as well.


I'd appreciate both of those, thanks.

05/23/2017 11:38 PM
For Picante Pass, I didn't have that flower on the donut staircase because it was deemed too hard for just a flower; not sure why it was moved there but I don't like it (same with the spike on the first jump). The disco shell was my bad, though.

The wood platforms were there because it was originally for W4 and I was going for a mine. Also, Yoshi's Island did it.

05/04/2017 03:35 AM
This really feels like something that should be left up to the individual level designers.

My guess is that the 'forward focused' nature of the official games is a holdover from an arcade mindset that influenced the original SMB, same with the score and time limit. SMB2 and Yoshi's Island didn't follow this paradigm, and it's likely many of the submitted levels don't either.


Thanks for the feedback. IIRC the level has actually barely changed since even the first version, aside from the boss of course.
The yoshi eggs from the boss are actually just empty eggs, they're with the SMW items in the NPC dialog.

Lakitu Rampage
-I was expecting the worst. But no, this is actually a pretty nice Lakitu level! It also is really fun to fly through it with Blue Yoshi, so is probably the most successful blue yoshi stage I've played yet.
-Unfortunately there's a bug. Something wrong happened to Airship 2, and it started LURCHING all over the stage for some reason. I couldn't figure out why, and couldn't complete the stage (I mean, I had blue yoshi but if I didn't I'd be stuck). I was right at the end, too, so I'm gonna call a mulligan on it.

Sinister Crypt
-Cool level! The boss gives me pause.
-I don't appreciate that spikes appear on the first row. I intuited that I needed to go down there to continue fighting, but then spikes appeared from nowhere and hurt me. Why do they have to appear at all? The platform can just disappear and surprise those who didn't stay on the side.
-The fourth phase is a bit much, considering the checkpoint isn't right before the boss. I'd scrap that part and end things at the third bridge. Either that, or just have the first bridge bring you straight down to the fourth phase. One or the other.
-Don't have that wall push players who get the leaf keep on going. Have it stop after a certain point.

Lakitu turned out to be rather awkward to design a stage around, so I'm glad you enjoyed it. As for Airship 2, that was removed from the level some time ago, precisely because of it's erratic movement. Were you playing the latest version (should be v5)?

Regarding Sinister Crypt boss, the first bridge was meant to be a victory fake-out, but was it that obvious you need to jump down to progress? (The spikes were meant to funnel the player toward the spot with the axe, but I didn't consider what happens when they spawn right on top of the player)
I was taking suggestions for the boss and didn't want to seem ungrateful by not implementing them, but I will admit I'm not fond of the final phase (or really any elaborate custom boss full of layer shenanigans), and honestly wouldn't mind, ahem, axing it.

Yoida, Plucky Robot Minion
A service bot built by Balbo Technologies to transport materials, Yoida uses its crystal electromagnet "ears" to hover. Its antennae allow it to tap into electric currents, giving it a number of electricity-based attacks and limited telepathy, which it uses to scan enemy weaknesses.
Yoida escaped from Balbo Technologies after stumbling upon their nefarious plans; it was last seen traveling with Al Afte.

Al Afte, Alien Dinosaur
A green dinosaur who speaks in an alien language and carries a mysterious egg-like artifact. Al Afte's greatest priority is protecting the artifact, and he will attack anyone who he perceives to be trying to steal it. Al Afte can attack by bodyslamming or tail whipping his opponent, and he can also cast spells by channeling the artifact. 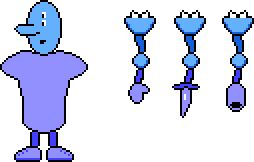 Beel Bool, Combat Marionette
A prototype robot soldier with detachable arms and a long nose designed to sniff out intruders. Beel Bool has a variety of arms it can swap out in order to complete a variety of tasks, including a punching glove, a plasma cannon, a short blade, and more.
Pages: first prev 1234567891011 next last