@Xenomic: And that is what I call a good dungeon. I am kind of interested to see where your eventing will come in play, but yes, adding in those holes makes it feel much more organic. Ahaha, I am glad I could guess where the tileset was from. XD
I seriously don't see any real flaws with it at all; It does not look repetitive for a single section.

07/22/2014 12:29 AM
@Karins: The town looks pretty good, but the main thing that sticks out in mind is the house with no windows in the center and in front of the lake. The lower left house looks a bit suspect as well, but not shabby at all!

@Xenomic: Is that a touhou sprite I spy? The tileset choice reminds me of the final dungeon in ff5 for some reason.

Well, after sitting down and trying to figure out how to solve the floor issue. (Yellow on black does not irritate my eyes, but my sister repeated the same sentiment as Tungermanu). So, I decided to slim up the wall tiles by one line, and then I created a wave texture with a slightly darker shade of yellow so it would not clash as bad. Besides, I feel like waves look more like sand either way. Do you think these changes work well? (The torches by the portal change colors btw) 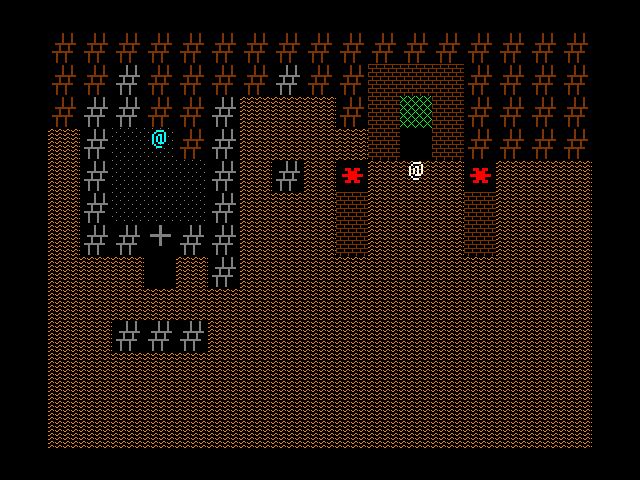 Oh, and thank you guys for giving me some good criticism. It's hard to work out some of these things by yourself sometimes.

07/21/2014 08:13 AM
If anyone remembers my ascii rmvx project, it is slowly growing organically~
This is a screenshot of a crashed space ship with the dazed engineer trying to figure out what happened, in the middle of a canyon wall in a desert next to a portal.
Yup. Ascii requires some imagination. 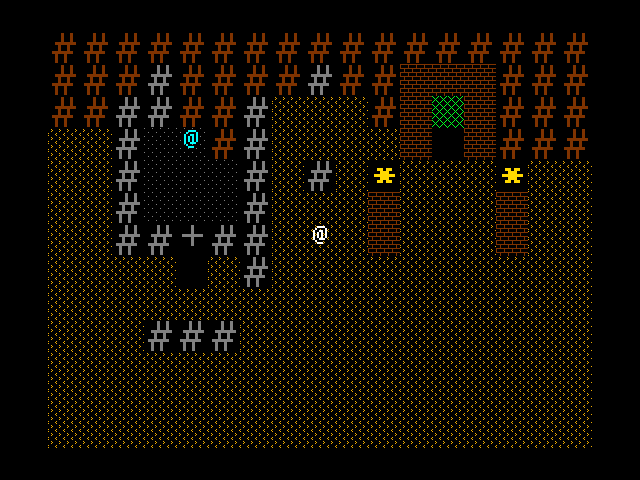 Should I change any of the tileset, or does it look like it will work?
Remember, it is supposed to look like a pseudo-ascii style(The brick-walls I made betray this a little, but they work well in my eyes.

05/28/2014 04:43 AM
I just stumbled onto a topic I posted on 2 years ago, and am now sitting here in wonder that 1. I don't remember posting any of that, and 2. that the person I was before I lived in Japan, was amazingly a sociopath with a complete authority complex...

And now I am just a happy wandering frood whom wants to goto Australia. What japan has done to me... It's kind of scary, that mentality change in the course of 2 years.

05/28/2014 04:34 AM
Hmm... If I remember, last time I connected over a year ago, I was insta-banned before I could even post once.
EDIT: Opps, it looks like I should have read this topic again. Been forever since I posted any of that, completely forgot.

Even so, we really should try to get the irc back up and running.

05/24/2014 07:07 PM
I am off to Newyork. Suddenly, I am doing something as compulsive as quitting my job and taking off to New york city to meet up with my friend from Thailand. Why do I feel such a dire urgency to see him again? This is fascinating.

author=Dudesoft
Are you in Germany?


Ahaha, good guess. Nah, I'm living in a hostel in Orlando. The true beauty of hostels, is the sheer amount of germans you deal with on a daily basis, each of them thinking they can try to speak in german to their group, that nobody can understand.
It's the same problem I have with japanese, but to a lesser extent; The japanese normally end up dragging me into their group due to all the habits I still have from Tokyo making me into a curio for them to be entertained by.

Also, how do people stand the slow part in FF7 when you go to the golden saucer? IT TAKES FOREVER... X.X