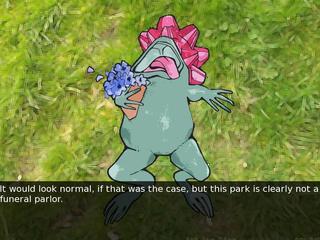 It was close! So close! Until
Show
the game started repeating endlessly. Great, time loop,
I know, but just because it worked for Steins;Gate doesn't mean it works here. So bored by the end, completely soured me on the idea of Bravely Second.

edit: Solitayre, I just checked out his facebook page and it lists Kisareth Studios as his top employer. I think that confirms it--these are all the same dude!

As for Mystic Quest, I had a real hoot with that game when I was young. It was by no means my first RPG, but there weren't that many others available in those days. Kickin' soundtrack, but I had some weird issues playing it, that revolved around a piece of music:


Whenever I was in an area in which this track played, if I fought and won a battle, this music would slow down and then stop, the final note sustaining endlessly, and the game would lock up. I tried renting a copy to get around it, but I had the exact same problem with the rental.

So eventually, I discovered that if I quickly ducked into the menu and saved the game before the music stopped, I could reset and reload and continue. So those dungeons took a really long time with all the constant saving and loading.

To this day I don't know if this was due to a run of faulty cartridges, or something wrong with my SNES. All other games worked fine, and Mystic Quest worked perfectly except when that song was involved.

Did anybody else encounter this?

yeah those both sound kosher.

If I throw in an extra couple of bucks, will he include his FF4 remake?

Thoughts? I'm really amused and impressed by the gall of it all.

What I find particularly appalling, however, is if you navigate over to his website (not gonna link to it), right next to the link to buy his game for $8, is a link that says if you pay him $1000, he'll export your RPG Maker game to Android. That's pretty devious and I hope nobody's naive enough to fall for it.

Mods, if this is an inappropriate thread, feel free to lock it and I apologise in advance.

Cool (And Not So Cool) Looking User Interfaces The menu for the original version of Persona was a bit (ok, very) clunky, but I had a great deal of affection for its planetary motif.

edit: In case it's not obvious, the planets orbit the central command "sun", as the player presses left and right.

02/24/2015 10:47 AM
That's a very broad question. What kind of programming? RPG Maker VX Ace uses a variation on Ruby called RGSS, but you probably won't need to touch it if you're just getting your head around the system.

* Recreate all of the character (over 108 unique, plus NPCs), object, enemy and location graphics of a 40+ hour PS2 game in 2D

I don't mean to keep you off your grind, but do you realize what a gargantuan task this is? Suikoden 4 took a team of one hundred people three years to develop. Recreating it from scratch would be monumental for a paid team of professionals, let alone RMN forum users.