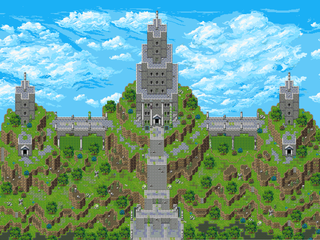 Winner of the 1.44 MB Floppy Disk Event. Four monsters have been turned into humans!

05/19/2010 05:30 AM
I have some free time for the next month and a half, so I will be playing and reviewing more RPG Maker games. Thus, I'm making a blog in the style of edchuy's. Here's my current review/play list, in order:

If I forgot to list your game and already said we'd trade reviews, feel free to let me know. I like receiving reviews for my game, so hopefully we'll get some give-and-take here :)

05/18/2010 09:41 PM
Approximately 10 minutes ago, I finished Hero's Realm. There will be about 100-110 videos when it's all finally uploaded. Speaking of which, I will hopefully get my internet fixed in the next couple days, so I can actually start uploading videos and pictures again.

Expect a very positive review in the next couple days.

Oh, and if you hear me complaining or cussing in the video, it's not because I hate Hero's Realm; it's just my tradition :) I wouldn't be doing Legend of Denadel if I hated HR :)

Any fans of Survivor?

05/16/2010 02:43 AM
I've been wanting to host an online Survivor game since my back-to-back performances in the Star Wars Fan Club, in which I made final two and final six respectively.

Hosting a Survivor: RMN would make me such a happy panda: you have no idea.

Challenges would be based mostly in the RPG Maker. Immunity challenges would be week-long affairs, and smaller reward challenges would be held once a week as well. Every Saturday would be a tribal council, in which one person is voted out. Those with immunity cannot be voted out for that week. 14 or 16 players would be ideal, though as few as 10 is possible. The initial two tribes will eventually merge, and the final two players will plea their case to a jury of the other contestants.

Prizes? Not sure. The ones I played didn't have any sort of reward, just bragging rights.

The RPG Maker challenges would be VERY, VERY simple: probably team (and later individual) contests regarding 20 x 15 maps, single boss battles, single cutscenes, etc. Reward challenges will be smaller and unrelated to RPG Maker. Submissions would be unnamed and judged by a panel of 3 unaffiliated people.

04/20/2010 08:18 PM
I'm having trouble editing chipsets in Windows 7. Every time I try to mix chipsets using paint, they just appear as a black screen in the maker. It must have something to do with my settings on this new OS, but I can't figure it out. Help?

Show me your screenshots! Spring edition.

04/19/2010 02:31 PM
I guess there was a lot of drama in the topic I saw back in the fall. I suggest only posting -positive- feedback about maps that are works in progress. No arguments. Unless you want someone to close this topic :)

Here are some of mine: 04/18/2010 05:58 PM
I've been thinking about dungeon puzzles a lot lately. I like a decent amount of puzzles in RPG Maker games -- maybe not as many as the Zelda games, but certainly somewhere near the level of Xenosaga. How about you guys?

What kind of puzzles do you like to see in RPG Maker/indie games? What are some of your favorite indie puzzles?

What do you feel is an "ideal" number of puzzles per dungeon -- or, in more general terms, do you prefer a few/some/a lot?

As for me, I love everything from ice puzzles to water draining, invisible mazes, switch flipping, passwords...anything to add flavor to a dungeon. If it's just a long corridor or maze full of random battles, I get bored very quickly.

I love this site.

04/18/2010 12:58 AM
I know I've been "love bombing" lately, but seriously...this is one of the best sites online for RPG Maker. Topics are focused on RPG Maker and related concepts, not girlfriends/drama/pointless criticism. This is what it's all about. I do wish we could advertise a bit on the forums, but I also understand the desire to avoid flooding the board with spam.