Close
I love writing and developing games with the Ren'Py visual novel engine. I've been learning about the engine, seeing a little improvement with each of my games. I joined RMN due to my interest in online audiences and freeware games (such as Misao, Mad Father, Cave Story, Mokego Castle, Desert Nightmare and Mermaid Swamp). 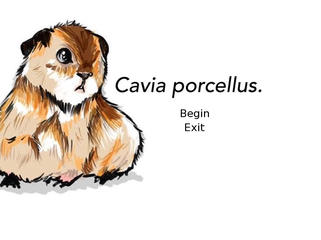 01/27/2017 03:35 PM
I finished the game and got one of the endings (don't know if it was the 'good' one but it explained things). I'm thinking of possibly writing a review, but I'll leave a few general comments for now (and for people thinking of playing this game).

It's a very average rpgmaker horror game. If you're expecting to be scared, this isn't the game for you. It doesn't quite have a 'jumpscare' element - if it's there, the effect was missed on me. I feel that overall, it's a good game with potential, and plays more like a demo than a complete game. Points for the premise, atmosphere (especially in the second area) and simplicity. One of the puzzles made me think, but otherwise it wasn't quite challenging enough.

Show
In terms of missed potential, in the area where you're opening treasure chests, a chase scene element or 'lights out' would have been effective

author=sudaku
Would you be okay with someone doing a let's play on this VN? :D

I'd be happy if you did!

I found the puzzles challenging enough, BUT I've gotten stuck after finding the two pieces of paper that I think have the number 250. Might be a bug in the game as I tried this code on the library shelf several times ... if it's 4 number code, I wasn't able to unlock the drawer with codes 250 + 0-9 as the last # either

As mentioned, walkthrough would be very much appreciated!

Also, is there a save feature that I'm missing?

05/16/2016 02:25 PM
I just finished your game, and it wasn't bad! It could have been a bit more creepy - a lot of the time it was wandering around a normal-looking school and I forgot I was playing a horror game. That said, I enjoyed the graphics and the game was decently unsettling, good job :)

author=fimamati
I didn't see any choices for question 1-5. Not sure if that's how you wanted it because number six choices are all yes. Is it? I mean am I like playing one of those people that just mark anything. lol.
i'll start over.
my thoughts while playing
maybe spoiler
Show
(hmmm Question 5 makes me think those empty selection are suppose to be empty)
(Glad this is a game. in real life Id hunt someone down and bombard them with questions)

(hmm just found some more questions with answers I can't read. Come to think of it, whats the question. Can I read? hmm But I read in the beginning. What kind of sick joke is this?)

(Am I part of so crazy experiment. Maybe I should look that word up)

(I think I just got fired)
I went back to see If I could find the other ending. lol
I enjoyed it. thanks for sharring

ps. I tried doing a review They said it's more of a comment so I will paste what I said rather than post a new comment. I believe it's because it's short. It's a bunch of one liners.
Show
"It was interesting.
after completing the game I realize that What I was feeling seemed to be what the designer wanted. so I will give a star there.

I also played it through twice because I was curious about the second ending.
That says a lot because I have a short attention span. star for that

Though I was looking for some other pictures at one point; the music kept me focus. star there.

Last but least The game was completed and even though in the beginning I thought I was having a glitch I realized a little later I wasn't; Therefore I didn't run into any pot holes to take me from the game. star there." I would give the game 4 stars

Thanks for playing! I think you got the right feeling from this game, it's supposed to be strange and creepy and maybe a little bit confusing. Thanks for the feedback too, I enjoyed writing this game and I love to see what people think <3

Show
*spoiler All of the choices in the game apart from the choice to open the door at the end are not 'actual' choices (ie. they don't impact the game). They're meant to look like choices but they're just lines of dialogue.

The test is if you can 'choose' something without seeing the answer.

GP Ltd. needs someone to make the decision to experiment on people, in case their activities were discovered they could blame that person, the person who 'decided' who was going to be experimented on. Luckily, your internship is finished before that happens, but it's still not great for you.

Interested in being the first to play/test an experimental visual novel?

03/14/2016 10:38 PM
I'm not sure if this is the correct section to post this forum, my apologies in advance. Here, I'm reaching out to the excellent RMN community to seek feedback on my short 'experimental' visual novel (which is complete, save for art).

Please note me if you're interested in testing!
I'm looking for people who have the time to leave constructive feedback.

Cavia porcellus (meaning guinea pig) is an experimental visual novel with a unique plot and mildly 'unsettling' content. You are placed in the role of an Ethical Administration Intern with an enigmatic research company called GP Ltd.. With each passing week, 'something' in your work changes, and tasks that may have started out innocent quickly seem to be turning into something strange or even sinister.

Cavia porcellus is a psychological exploration that asks - "does every choice matter?"

Featuring:
- original story by Leigh
- backgrounds drawn by L. Dickinson
- soundtrack/music by megupets
- 2 endings with a play-time of ~15 minutes

author=Kylaila
Haha, you're welcome!
It is just that good ;) I had a lot of fun replaying it together with a friend