Close
Thirty something year old long time rpgmaker lurker turned semi active rmn poster in it for the long haul on a game he started as a teen ager. I'm also married, a Dad, a high school Philosophy and Theology teacher with a PhD from the University of Oxford, a committed Christian, and a writer (see my twitter). 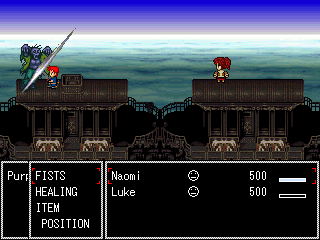 What's the closest RMN has ever got to FFVI and Chrono Trigger?

In my life I find myself just wanting to play those games over and over again. What's the closest we've ever got to these in the RMN scene?

-Complete
-Story/narrative led, with great dialogue (i.e. not the DQ approach)
-Strong characters and an ensemble cast
-A fantasy or steampunk setting, or at least starting in one
-SNES aesthetic

The closest I remember getting to this were The Way and Forever's End (though the latter not complete).

What else would people recommend?

Need a writer? I could write for you.

I'm partly posting this just to see if anyone responds!

Anyone out there love mapping/coding but not so keen on writing / looking for a writer?

I don't have time to make games these days but I do potentially have some time to write for them (story and/or cutscenes and/or dialogue etc.)

Check out my profile for examples of my rpgmaker work.

In terms of writing, I've had some short stories published and I'm currently finishing off a 'literary mentorship' with The Literary Consultancy, London.

Post here and I'll consider writing for your game, for free (unless anyone wants to hire me for a commercial game!)

Of course I will need to be won over by your project and/or previous work too :)

Most interested in writing for: A massive sprawling epic Final Fantasy style rpg. But open to anything.

Anyone have any ideas for a 'metal temple' dungeon?

Anyone have any ideas for a 'metal temple' dungeon?

Anyone have any ideas for a 'metal temple' dunegon?

06/27/2013 11:38 AM
Howdy. I really suck at making maps so I’m looking to recruit some map-making help: either some one-off creations of single maps or an official map-maker to be credited as a developer of my main project http://rpgmaker.net/games/2693 This is in rpgmaker 2003.

I know that everyone says that you have to practice to learn mapmaking better, but I am REALLY challenged in this area and I don’t have much free time to work on my game so it’s pretty demoralising.

Also, to sweeten the deal, I’m willing to do something in return: review your game, playtest your game, or write some dialogue for you (writing I like to think I am slightly better at than the visual stuff, check my main project to judge for yourself). Also, if you make more than one map for me then as I say I will credit you as developer of my game and you will get RMN reputation and makerscore from that too! Yaaaay!

The specific maps I am looking for at the moment (using particular chipsets I have in mind, but open to suggestions of others) are three:

If you don’t want to do this, could you at least point me in the direction of a rm2000/2k3 game that has any good maps like these in, so I can try and emulate them?

If you are interested, reply here and I will PM you with details about the suggested chipests I am trying to use. As soon as you send me the map, name your choice of review, bugtest or dialogue and I will return the favour!

I realised a little while ago that you can copy battle animations between rpgmaker projects by copying them, closing the project and opening the new project and pasting them in. This is quite laborious, but totally worth it seeing as good original battle animations are one of the most difficult and time consuming things to make.

But, rather than just downloading some massive game with loads of animations, *coughherosrealmcough*, copying over the 'Battle' and 'Sound' folders and then pilfering all the battle animations like a sneaky thief, I thought people might like to swap some original animations.

Unfortunately, most of the original animations I have made involve character sprites which are specific to my game and so not much use to anybody else. However, I do have SOME original animations that I have made, so I'm going to be putting them in a blank project folder zipped up in my locker and adding to it over time. You can find that here:

There's just one in there right now, a spooky speaking skull that I'm quite proud of which I use as a 'Silence' spell. You need to transfer the 'Battle' set and the 'Sound' too. I'll also add in any that people post here.

I've done this for 2k3 but I imagine it could work for the other makers too, certainly 2k and poss XP/VX/Ace. Let us know!

02/11/2011 03:21 PM
Hi, does anyone have a good looping train sound wav or mp3? Doesn't have to be very high quality. Just background ambience and wheels going around, that sort of thing, noise for while the train is in transit. I've checked all the soundfile archives in the stickied topic and got nothing.

02/07/2011 03:10 PM
I'm a youth worker by profession and part of my job involves teaching Religious Education to primary (elementary) school kids. This term (semester) in one school with kids aged about 8-11 I've been doing it using rpgmaker2000. Basically I'm having them design their own material as we learn stuff about Christianity, and then at the end of term I'm going to put everything together and give it to them each as a game. I did a simialr thing once in a Philosophy class and it worked really well.

So for example, the first week they all designed a character which they drew on a piece of paper, and which I am replicating as best as I can in CharasEx to make sprites for the game, and we talked about how in the Christian tradition God designed and created humankind and how he is pleased with what he made (Genesis 1, Psalm 139). The next week we came up with "super powers" for our characters (=skill sets) and then dsicussed Jesus' parable of the talents and how we all have skills and talents to put to use.

I have mapped out the whole of the term, but I was just wondering if anyone has any ideas for themes or points of connection that could help me out, as some parts of the material are weaker than others? I'm sure there are points of connection with other religions too, as RPGs are so closely linked to mytholgy, although I'm just working within the Christian tradition.

So, aside from the ridiculous replies I anticipate, does anyone have any ideas about this? Thanks in advance.
Pages: first 12 next last