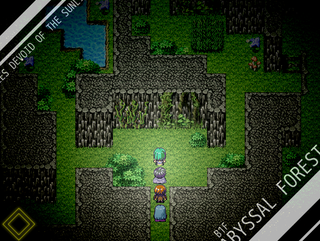 12/23/2018 07:08 AM
Dropping by to relay:
Archeia isn't able to connect to RMN due to a service outage in her area, so her secret santa may be submitted late.
http://outagereport.ph/pldt

It's been a very long time since making Substar, and I've generally felt the same way about some of the dungeon gimmicks and the Ex Clear mechanic.

I remember when I'd actually be tolerant enough to play through my own game several times but retrying Substar now, I definitely feel the more frustrating side more often (hah).

Encounters were actually score-based, the tile you stepped on would increment an internal score that upon reaching a certain value, triggers a random encounter.
On average you'd have 15-20 steps to get a random encounter, but depending on which region you walk around it could be as low as 5-8 or as high as 30-40 steps.

A lot of the plot was left unfinished, unfortunately. There were plans on making NPCs appear in the dungeon, events triggering when you eat in the cafeteria, and a host of optional bosses with their respective quests (which never made it to the game - a lot was due to my excitement at having a game somewhat finished actually!)

I'm glad you find the game satisfying, however!

author=Shinan
Like red is incredibly well established so trying to buck that trend is always going to be a bit of a challenge.

author=LockeZ
But seriously WTF is up with that screenshot of a menu on the upper right where the increased stat numbers are red and decreased ones are blue? That's confusing as hell. Don't do that.

This is actually exactly what I meant! I don't SEE red being such an established color for "bad". I come from playing a lot of games where they use red/orange as the "positive" color and blue as the "negative" color, extending all the way to yes, stat changes! It came to mind when I was discussing my buff icons with a friend and he pointed out that they were upside down because he expected the buffs to be blue and debuffs to be red, while I had the natural instinct otherwise. Show me a picture of a game where the negative stats are red and it made me do a double take.

Also all the screenshots on the right side are games that use red as a positive color! (default rm only applies that to the standard buff icons though!)

Red is often used as a color for happiness, courage, success, strength, and fortune and so on, especially in China (see all their red ceremonial stuff? thats why), while blue can also just as easily indicate damage (turning blue, bruise, sadness, torment)
Notably, green is almost never used for a negative effect, though. At most, it would be the color for Poison visual effects or icons. Generally when green is paired with red, red becomes a negative color, but when paired with blue, it's not always the case.

While the opening post is worded rather divisively (its all chaos) I feel there is definitely a solid ground to think that "red is strong and blue is weak" can easily be communicated to a player. (Also because some of the games I've been recently playing do that color coding its been working on me)

On the other hand, I have a hard time seeing blue being used to signify something positive. Blue, as much as I try to interpret it, doesn't really scream "powerful" at all. Its loyal, humble, and calming, but it isn't "strong". I feel like it is wrong to use blue as a "buff" outside of maybe MP regeneration/healing/protective effects. 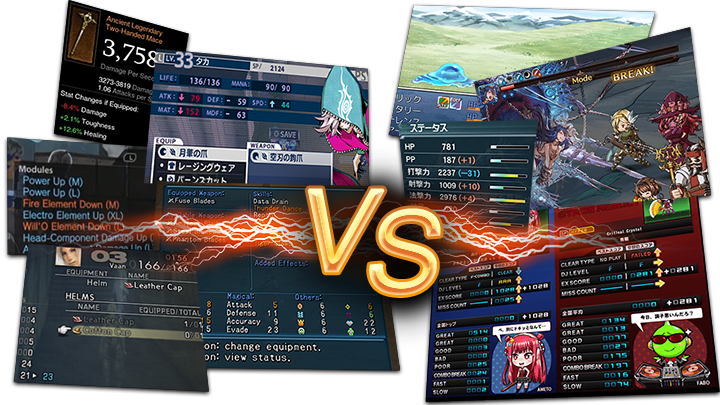 rasalhage - Today at 20:20
alright post it
(and put small text implicating me at the top thx)

Should buffs, positive effects, and stat boosts be red/orange? Or should they be green/blue?

This is a complicated and sensitive design choice that dramatically impacts how players approach your game. Setting the mood associated with your increases and decreases affects the overall tone of your menus, battles, and subtly nudges the immersion of your player. But how should you assign colors to the realms of "positive" and "negative?"

Red is often cited as a passionate, zealous color that signifies conflict. It attracts the eye more than any other hue, and is the first thing a player will notice on their interface. But does that mean it's better suited for indicating what a player gains, such as a big attack jump from a new weapon? Or should it be used to bring attention to urgent debilitations that require immediate attention?

Blue is, by contrast, often associated with calm and collected emotions. It encourages the player to carefully consider their options available. But does that mean it should be used to reassure the player that their powerful damage buff is in effect? Or should it be used to remind them that for every point they greedily gain one one stat, another stat must suffer?

Green and Yellow sometimes play into these dynamics, serving as comforting and peaceful colors. They can help the player find solace in increased strength, or they can take the sting of off nasty ailments. Do these have any place in your game, or do you require something more polar?

These colors can adjust the mood of anything in your UI, from damage and healing fly text, to equipment previews, to help text and ability descriptions, to even health and resource bars!

Where SHOULD these colors be used? What's the correct way to use them? And, more importantly, which methods are wrong?

[RMVX ACE] Is it possible to stop Ace from Resizing text?

In particular, the line
draw_text(x, y, 72, line_height, Vocab::level_a)
That number determines the "draw width" of the text! If it squishes again on stuff like Level 100, you can raise it even further to make it fit more.
Do note that it can potentially over-draw to the HP gauges if the width is set too large.

I've been waiting for this!

04/04/2016 12:42 AM
Dread Behemoth is extremely old and might not be representative of the current state of the game anymore!
I'm truly and honestly trying my best to make something great out of this! There is currently not much I can show since we're transitioning to RMMV, but when we do have something to show, I will do my best to make it drop jaws!

author=Ratty524
Thanks, Rhyme! I actually forgot about that stamina system until you brought it up. My bad. Do different skills have different stamina costs?


The combo results themselves do not, but the Runes required to perform the combo spells do. Once you cast 3 Runes, the spell is guaranteed!
Pages: first 1234567891011 next last