Close
I made this site and it's awesome. But I don't run it anymore. Now I'm just a plebe like you.

Here's the oldest screenshot of RMN I have 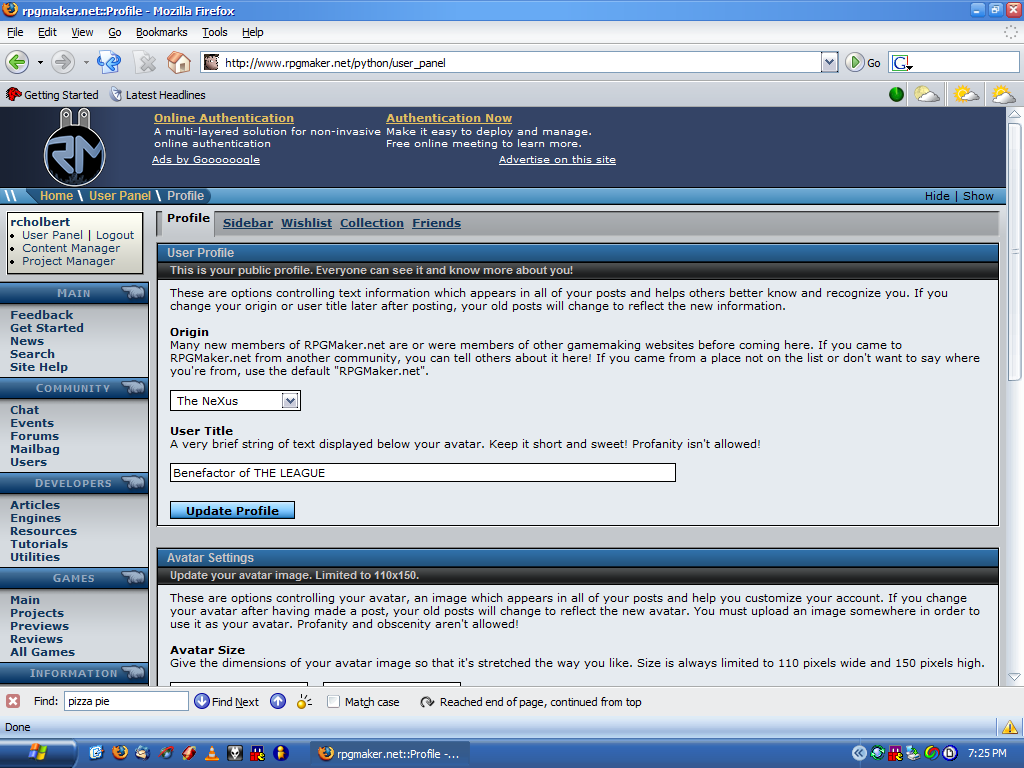 Taken on 2/20/2006 by the lord and savior Holbert. I think this was still during the time of us trying to figure out what on earth we were doing.

I can even still remember working on some of the CSS.

Why aren't you fuckers in IRC?

Addendum: Slack is a bad avenue for community interaction.

There are also easy Chrome apps for IRC, such as this: https://chrome.google.com/webstore/detail/byrd-irc-client/endimfdcgfnlmoankhocnkhgohmoecoi

There are definitely some issues I've noticed on the site. Majority probably caused by me years ago. And a lot of my (baaaaad) UI decisions remaining.

There a GitHub repo for it or anything? I'll be honest in that I see Gamejolt pretty much kicking this place's ass when it comes to technical prowess. Which makes me a bit sad, so I was wondering what the latest word was.

[RMVX ACE] Are there any games without those horrid default sprites?

On April 2nd I am going to shut the site down. I realize that it falls very close to April Fools, but I wanted to give people notice to move their information. I have no plans to shutter the IRC channel.


The years have been filled with repeated hills of frustration and excitement. There has been a lot of great things that came out of this community. When it was buzzing and passion was in the air, it was an absolute joy to come here.

This was to be a den of passion. Passion to create and show the world what you've accomplished. Game development allows you to imagine a world and fill it with emotions, challenges, and goals. Striving to make something EVEN BETTER than what you had done before.

But over the years, the real ugly truth of this community has overpowered any shining successes. People are incapable of working together in a positive matter. Pride has blinded others. An aura of superiority and supremacy has clouded judgements. Passion has been replaced with poison.

I have not been immune to such poisonings either. Rather than play protector, I have played favorites. My motivation for betterment was washed away years ago by corporate betrayal. Literally. I've grown bitter and angry towards the community when I should have helped protect it. This I am sorry for and apologize profusely.


Passing the reigns, you might say? No. The ship must sink to try and wash away its stench. I have invested a lot of emotional energy into this place and it will hurt me the most to see it die. There is no better person to allow a child eternal rest than their own parent.


So let's talk take aways. What did we all learn in the 3 years of RMN? I can't answer that for any of you, but I can answer it for myself and share some history.

The goal of this website was to kill Gaming World. The many years ago when I was younger, myself and a few others felt wronged by their activities. This site was born out of that goal. It has evolved and changed during its lifetime but the underbelly of a weapon was still intact. GW has all but been wiped off the internet, replaced with a shell of its former self. RMN was near-sighted when it came to this. GW was already dying and being overshadowed in popularity by other places. Newer sites were able to market to what was hot much better than RMN did. You can see this by citing the lack of activity here compared to places such as hbgames and RRR.

Few people know this, but a few years ago RMN was almost sold. Yes, we were selling out. Except in this case they weren't corporate pigs, but a very good company named Think Services, which has changed their name to UBM TechWeb. These are the people who own Gamasutra, GDC and other established industry companies. RMN was to become the official website for RPG Maker and Indie Game Maker. Holbert and I were to continue running the site and our editorial staff was about to come into creation.

Unfortunately the deal fell apart at the last minute. A surprise launch of Indie Game Maker by Enterbrain absolutely shattered the entire plan. UBM has been very kind to us and continues to host this site for us, truly proving their worth and merit as a company. A great thanks goes to them for this.

Through the years, we've had struggles and problems with staffing this beast. Part of this is due to the fact the site runs off my code which lacks intuitive moderation capabilities. The other is that it is just hard to find good help. There are so many people interested in themselves, making jokes of others, and worse.


It is too bad that things could not have worked out differently. I would have loved for this place to climb to the top of amateur game development and be a beacon of quality and craftsmanship but also humility and respect. That isn't what happened. It has some cool tech behind it, but you don't need tech to create. The best creations come from passion and respect.

Will this site ever be back? It's entirely possible. We've got a good domain name and I'd be a fool to let it go to waste! But don't hold your breath. Go across the vast fields of the internet and find new homes. I'm sorry this couldn't be your home forever but there are too many things wrong to correct.

Cleaning Up
I am tired of the random senselessness going on in the forums and will be reorganizing them. I like forums and don't want them to get away, but the site message isn't very clear.

There will be a single forum for off topic discussion called "Off Topic".
All the topics from General, Videogames, and Art will be merged into this forum.
Moronic Stuff and Introductions are going bye-bye.

There is too much separation going on here. And there is way too much random jerkhole activity in Moronic Stuff to keep that alive.

Stricter Modding
People run amok here far too crazily and that is going to stop. I have been working on a lot of improved mod tools to facilitate this.

Warning System
This has taken me way too long to implement, but now you people get to feel my wrath and have a record of it! There will be some documentation on the way it works, but to sum it up:

User gets warned and receives X warning points.
If user meets or exceeds Y points, they are automatically banned.
A user's warning points will "decay" back to 0.
If user is banned, they must wait for all their points to decay back to 0 to be unbanned.
You can be warned for anything you post on the site.

This might sound like a lot of negative updates and it will be for some. There's been a lot of drifting recently in the site's feel and attitude and that needs to change! Where are the games? The fun? That needs to come back.

So now here is where you can help!
1) We need a couple moderators who can help keep the peace. I am not really predisposed to anyone so if you feel you can sway me, go ahead and let me know how you can take care of the job.
2) We need more events! We need more things that focus on game making. If you have any fun event ideas, go ahead and post them in the Site Feedback forum.
3) We have a really fun podcast system on the site and nobody is using it! If you and some fellow game makerians want to do some podcasts, talk to me about it and we can hook you up.

Feel free to PM me directly about any of these.

Because we can't have nice things, this forum is read-only.

01/08/2011 09:47 PM
Since you all seem to act like uncontrollable babies, this forum is read-only for the time being. You will have to post your nonsense on a different site.

RMN in the New Year

I have returned to try and help stop some of the madness going on here. It is not my primary focus. The site needs a technical mind to spin the wheels behind it.

What does the future hold for the site? No idea. I initially wanted to post "RMN4 is now in development!" but I am honestly tired. There are a lot of great ideas floating around that would drastically improve the site. Unfortunately ideas are free and cheap but work is not.

In more positive light, a lot of great things happened in 2010 for RMN! We had a handful of very successful events. Super RMN Bros. was a successful event that created a really bad Mario game! Hopefully our skills have improved since that debacle and we will have even more events this year.

Game profiles have also started packing a lot of visual punch to them. Very nice to see some people flexing their design muscle.

The 2010 Misaos garnered twice as many votes as the previous year. That's better, but people really do need to vote more.

People do need to stop being so poisonous. Not every thing that is done is out of spite or selfishness. This site is supposed to be about creating games. Why are we not creating games? Why are people getting bogged down in senseless gossip? I love to chit-chat myself, but there is a point where it becomes toxic and paralyzing.

We need more games being made. More passion pumping through our veins! Less talk, more make.

FF:MQ was released today on the Wii's Virtual Console for $8! While a pretty basic game with a so-so story, this game is actually one of my favorites. The maps were very interactive for its time allowing the player to jump, swing weapons, throw bombs, etc. The enemies in battle also changed graphics based upon their health level, so you could tell when you're getting close. The game is probably best known for its rockin music. There are gobs of guitar covers of it all over YouTube. Here are probably the most well-known songs from the game: