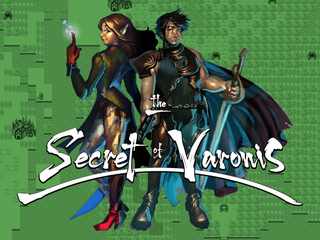 The Secret of Varonis

A Gameboy-style RPG -- what lies beyond the gate of Varonis?

author=UPRC
Played this last night in the middle of an overnight stream. 10/10, would get mindfucked again.


Haha, glad it was fun -- late night seems the best time to play this sort of thing

05/02/2022 03:36 PM
Also worth mentioning -- DynRPG is some pretty advanced functionality really aimed at experienced 2k/3 users. If you're having this much trouble just getting 2k/3 set up, consider trying without DynRPG first or even looking at one of the more modern makers (which include more accessible scripting tools that make tools like DynRPG unnecessary)

author=Zachary_Braun
I just had a thought: what if a player liked one particular lower-tier monster and wanted to take it to the end of the game? Would it be possible to have a monster become a stronger version of itself? I mean, I know part of what makes monsters monsters is that, individually, they don't have growth. But I thought that that would be an interesting challenge, if monsters could grow stronger by, say, eating the meat of lower-tier monsters.

Since you developed the internal record of what they'd already eaten, you could do some interesting things with it, like keep these prospective growths limited, based on the current world or tier of monster.


Yeah one of our ideas on the to-try list was the idea of "prime HP" or something that would be kept consistent between monsters. It's definitely SaGa-ish, but the current form design also helps with the "good form, but too low level" thing: the monsters are broken into families, which mostly share the same niche. For example, the Elf family are all glass cannon magic nukers that eventually pick up the BLOOM spell to restore ally ability uses. If you like that family, you might start with a NIX and then level into a GNOME and finally an ELF and still keep the general sort of build (even if secondary abilities and elements and things like that move around). And all families have a top-tier representative for the endgame.

Slay the Lizard of Lunenberg! (and other thankless sidequests)

author=ngoomie
I seem to be experiencing a weird bug that's preventing me from progressing?

author=Krolan
I'm here to second the report given by ngoomie.

Thanks a ton for the bug reports!

You're very correct that the door->stair teleport was what was causing the problem. I've fixed some passability issues around that teleport that were introduced when converting the game for EasyRPG web. If you care to continue, the arrow puzzle past the well is the only task remaining for the Big Lizard Showdown. I appreciate the time taken to let me know where the issue was in such detail.

Slay the Lizard of Lunenberg! (and other thankless sidequests) Review

author=TheRpgmakerAddict
EXCEPT that it did not took me less than an hour to complete!


heh, yeah after reading that and Muffle took 2 hours reading aloud, I removed that from the description.

Slay the Lizard of Lunenberg! (and other thankless sidequests) Review

Re: not having enough cash for both items -- the game is designed so that for the first purchase, you can't get both. But whichever you pick, you'll unlock a path to a high-valuable trash item (worth 10gp) that enables you to purchase the other. So you can explore in whatever way feels more natural and it works both ways.


and trust me, I fixed that bunnysuit sequence break thing as soon as it was pointed out and before the event stream haha

Slay the Lizard of Lunenberg! (and other thankless sidequests)

author=iddalai
When Discord is the alternative, then "Don't like don't use it" starts to make a lot of sense! What does it matter if RMN's community is thriving, when all that means is that a bunch of new users are playing forum games or discussing non-game design topics over at Discord?


while the discord is admittedly 10:1 general chat to gamedesign chat, there is still way /way/ more on-topic discussion there than on the forums, especially for the newer generation of users that only picked up the software via Steam sales and aren't 10year+ vets, even for 2k/3.

03/25/2022 06:36 AM
Ha, yeah I guess it was silly to assume my numbers are similar to everyone else's when it's been a long while since I actually made any RPGs with RPGmaker. For those, I'd definitely think RM would be a better source of organic traffic. (I still kind of think itch.io gamepages make the RM equivalent not as enticing to new users, though, and I don't think either site is a good source of organic traffic without heavy promotion)

And I don't mean to say RM or its forums are obsolete, by the way -- I'm set up for monthly server donations and I still check the site daily. Sites/forums are better suited for a lot of things (and I think it's ridiculous the discord has a tutorials/assets channel when RMN is /right there/). But as for "why are the forums inactive?" I do think it's the alternatives available elsewhere, not that they're mobile unfriendly or have outdated design or w/e

03/24/2022 08:16 PM
Forum inactivity is mostly because RMN is a "community" site now -- it's only really useful to the people who have been part of the community forever. itch.io has superseded it as a smallscale hosting space and does everything gamepages do and better, and actually has traffic from people looking to play games, not just develop them. On the other end, RpgmakerWeb is a much more active (and officially supported) forum for technical support and longform discussion of the engines. What reason would someone new to RM have to hang around here when those options are available? Like, even the OP of this thread was only posting here because their registration was delayed on RMweb haha. I don't a web overhaul is likely to bring RM up to par with either of those peers in this space.

Re: discord, it's a lot more attractive for new people just looking to chat/chill and get casual feedback. Especially when we disallow "here's my game" threads when most people are here to talk about their own stuff. Twitter seems to be the best niche for shortform dev updates that don't merit entire blogs, and there's a lot bigger audience there.

Also I don't think Discord "killed" the site any more than the Slack killed it, or the Skype killed it, or the IRC killed it before that. There will always be people who want to chat -- it's just that those types are the majority left now that all other site functionality can be found better elsewhere, and "having a discord" is the only aspect where RM is up to date.
Pages: first 1234567891011 next last