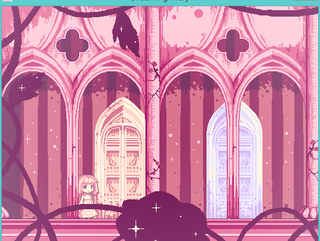 Mainly the thing that haunts me is how even the maps are completely identical, just in a different style. Like... please... no... those maps... You could have at least made them better, you know??

I'm actually half murderous and half amused, but I'm trying to focus on the amused part so I don't end up doing something I regret later.

author=nurvuss
Never thought I'd see the day, but somebody has essentially made a bootleg version of Dreaming Mary.

Thanks for letting me know, lol @_@

Trass and Chaude are planning now for more Painted Heart games. We'll do our best!

09/28/2014 08:20 PM
Ahh yep, the big tree actually has two versions, one that's the same color (you can see a little bit of it at the bottom) and one that's bright blue and has flowers. I'll try making the shadows more dramatic on the thin trees since they're not well defined >_<

09/28/2014 06:13 PM
@sinnelius yeah, they're not as refined as RTP usually is XD
They're completely painted rather than painted+pixel. Really, I just hope they're functional enough that it's not *too* out of place. orz Your 2 days of dedication are an inspiration to us all.

these are great as well though:

I'm very proud of you, as your game is okay
Be sure to add 3 years to any Target Completion Date you see.
All of the notices you have are for other people's games

Lying to and deceiving the player

author=Sooz
Generally, it's more annoying if you imply a player CAN do something, and then prevent it somehow. I think it's fun when I'm rewarded for exploring and testing boundaries by getting more of an impact on the story (or at least some swag).

I'm not sure I could offer any real advice on achieving it, since the question as-is is a bit vague.

It's ok, thanks for everything so far! The entire discussion has been really helpful. I was pretty much just rambling anyway XD